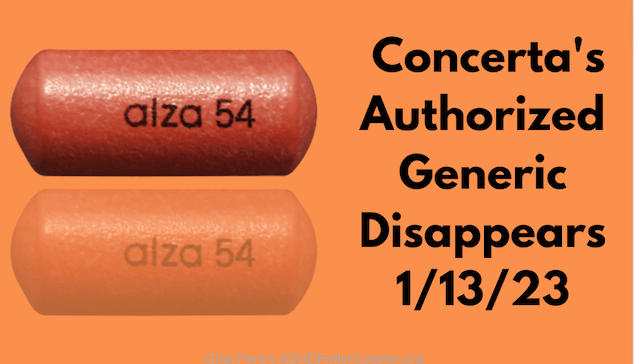 What does this mean for consumers who have relied on this ADHD stimulant medication for years?  That likely depends on personal resources, insurance pharmacy benefit terms, and other factors. Right now, I just wanted to give you a heads up—because Janssen sure didn’t.

Try not to panic!  Instead, use this time to gather information and get your ducks in a row.  It’s tricky this time of year, always, as stimulant raw materials run low. (The Drug Enforcement Agency limits supply, and I’m not sure it’s upped the limit since the COVID-driven high rates of diagnosis and teratment.)

I did speak with a Patriot representative who confirmed that the authorized-generic for Concerta ends January 13. To find more details, I made multiple phone calls to multiple offices at Janssen and parent company Johnson & Johnson. No response. (Companies don’t have to respond anymore. That went out with the flood.)

I’ve been covering Concerta and its generics since 2014. You can read a historical overview here: Generic ADHD Medications: Events In the News 2009 to 2022

But know that much might change come January 13, when the authorized-generic is officially discontinued.  Also, it might be that your insurance pharmacy benefit has changed if it follows a calendar year.

In the past, consumers could more easily switch to brand Concerta. They’d pay the brand price, of course.  Yet, depending on insurance coverage, it would be maybe 3-5 times the generic price. That is, more like $100/month, not $600/month. Even less with the home-delivery 90-day pharmacies.

Then everything changed. Beginning in 2017, “Big Generic” unleashed a slew of non-bioequivalent Concerta generics. Many are produced for pennies, some in poorly regulated Indian and Chinese factories. If your insurance coverage specifies generic (if available), that’s what you might get.

Even with insurance coverage that previously covered brand, soon that wasn’t an option, at any price.

Fortunately, Janssen continued to make available its Concerta authorized-generic.  With a bit of effort—and guidance found on this blog—many consumers were able to get brand Concerta at a generic price. But insurance companies and pharmacies paid a higher price, compared to the inferior generics.

In a very real sense, we’ve been fortunate to have had the Concerta authorized-generic (brand sold as a generic) for so long. It seems unprecedented.

This is partly due to Concerta’s sophisticated delivery system, using a proprietary osmotic pump called OROS from Alza.  Without OROS, Concerta generics are basically Ritalin generics.

That’s why the FDA downgraded the first two inferior Concerta generics, thanks in large part to ADHD Roller Coaster readers filing MedWatch complaints. They just didn’t work the same as Concerta does.

Things changed in 2017 when the Trump-appointed FDA chief over-ruled FDA scientists concerns about regular Concerta generics’ bioequivalence.  Next thing we know: A leaky boatload of junk generics.  (Yes, some work better than Concerta for some people. That’s not the point. The point is that they are not bioequivalent, and that’s the basis for generic status.)

Did this earth-shaking news come in a formal announcement from Johnson & Johnson, parent company to Janssen? How about an obscurely placed press release? No. Apparently, the company that has reaped billions from consumers choosing Concerta didn’t find them worth that little courtesy.

By the way, it’s not like Janssen’s been performing a charity with Concerta. Sales are up 19%, in the U.S., according to Johnson & Johnson’s third-quarter 2022 results. 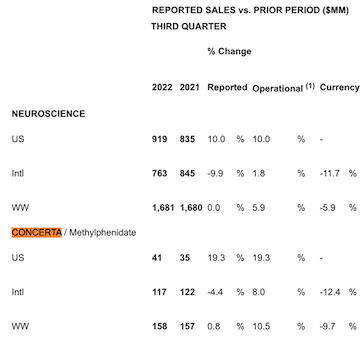 Sure, we’re grateful to have gotten the authorized-generic for this long. And we understand that other factors precipitated this change. But that doesn’t mean we overlook having no notice of this change. No press releases. No nothing.

Rather, three alert ADHD Roller Coaster readers gave me the heads-up yesterday. They reported unsuccessful attempts to get their current prescription filled. Upon calling Janssen’s authorized-generic subsidiary, Patriot, they got the news.

Shortly after, I called Patriot. The representative tried to be helpful but had few details.  Bottom line: Yes, the Concerta authorized generic will cease availability January 13, 2023.

Multiple efforts to get more details today from Janssen  or J&J have failed.  Apparently, company executives find it a trivial matter—metaphorically dropping on their heads customers loyal to Concerta for decades.

Many people this week (Nov 4, 2022) are going through “open enrollment” for employer benefits. That’s why I am rushing this with few other details, in case it helps with the decision-making. 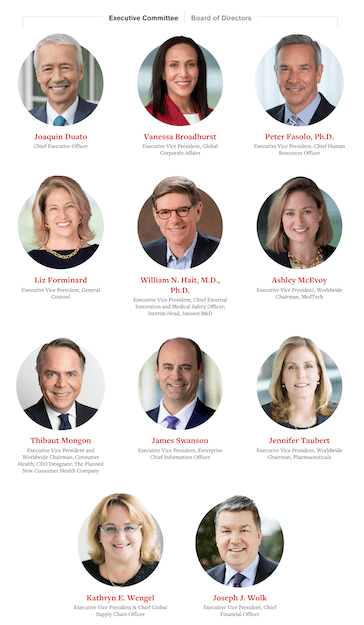 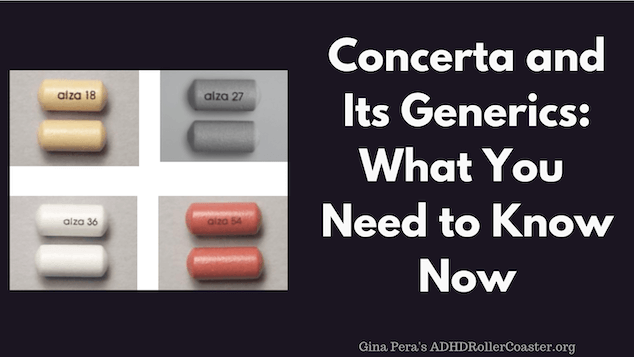