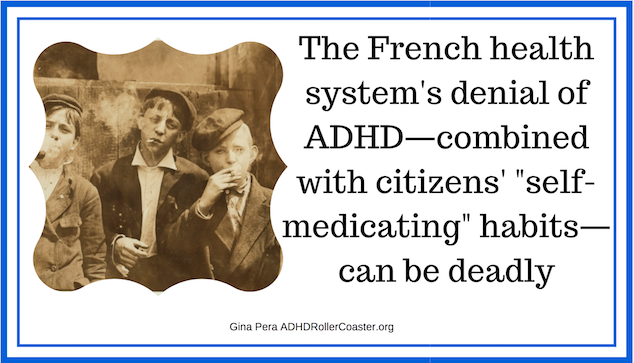 Have you heard that “French kids don’t have ADHD?” It’s not true. French Kids do have ADHD—as do children around the globe, at generally the same prevalence rate.

When the post first appeared on Psychology  Today’s website, in 2012, I pegged it as more self-promotional nonsense, the kind we see too often around ADHD. The kind the Internet has fostered.

That is, some unknown person with a book to sell or lagging therapy practice to promote decides—Yes! Say something outrageous about ADHD! Because that’s a surefire way to boost notoriety.

And for too many profit-driven websites, such as Psychology Today‘s, it’s a take-all-comers policy. No editorial judgment required. Do most consumers know this? It doesn’t seem so.

Unfortunately, this “meme” from Marilyn Wedge has developed legs. That’s why I want to strongly counter it.  (By the way, she entitles her Psychology  Today spot “Suffer the Children.” Indeed!) 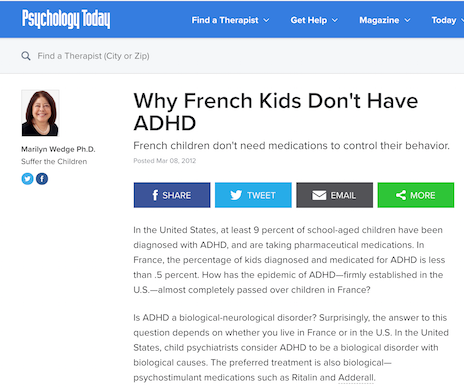 These sensationalist articles take predictable SEO-boosting potshots at ADHD as a:

Never mind the thousands of published, peer-reviewed studies on ADHD by legitimate experts. These self-promoting online “columnists” insist they know better. Mostly, they know how to exploit the public’s ignorance of ADHD to their advantage. 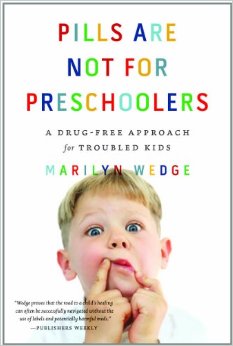 About the “French Kids” Author

The “French Kids Don’t Have ADHD” post comes from a Marilyn Wedge—a person on no discernible radar a psychotherapeutic expert.

She claims to have a practice in Westlake Village, a small community straddling the Los Angeles and Ventura County lines. Her stated Ph.D. is in social psychology, a field quite apart from clinical psychology; it’s much closer to sociology. She claims to practice as a masters-degree level therapist.

One simple definition of social psychology is the study of how people’s thoughts, feelings, and behaviors are influenced by the actual, imaged, or implied the presence of others.  Not to knock an entire field of study, but this surely seems a field highly vulnerable to subjective interpretations and fanciful narratives.

On her website, Wedge identifies herself as a licensed marriage and family therapist (MFT). She also claims to have published “numerous professional articles in the  field of family therapy.”  I searched both PubMed and Google Scholar but could find only other articles on Psychology Today‘s take-all-clickbait website.

About Psychology Today‘s website: Did you know that basically anyone can post a “column” there? There are apparently no standards—and even less editorial oversight.

The magazine Psychology Today used to be fairly reputable, but that was a very long time ago. It is now little more than a profit vehicle, via ads and its directory (wherein therapists pay to advertise).  All the more disturbing: Therapists are allowed to receive continuing-education credits toward their continued licensure, simply for reading Psychology Today articles (and a fee). 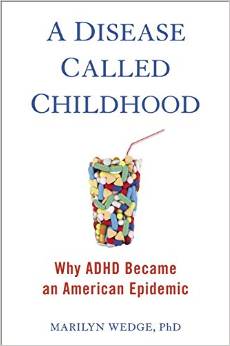 Here’s her first paragraph from the “French Kids” post:

In the United States, at least 9 percent of school-aged children have been diagnosed with ADHD, and are taking pharmaceutical medications. In France, the percentage of kids diagnosed and medicated for ADHD is less than .5 percent. How has the epidemic of ADHD—firmly established in the U.S.—almost completely passed over children in France?

She documents neither these nor the rest of her claims.  Did I mention? French kids do have ADHD.

The 9 Percent Figure for American Kids

The 9 percent figure comes from the U.S. Centers for Disease Control (CDC). It muddied the statistical waters with the publication of its 2012 survey, in which it found that 9.5% of children age 3-17 years have been diagnosed with ADHD.

I’ll save dissecting that survey for another post. For now, know that those numbers are based on phone surveys of parents, not any type of official clinical tally.

The bottom line is this:  Parental report, the basis of the CDC data, is controversial and known to over-report the prevalence of ADHD. (Sciutto MJ, Eisenberg M. Evaluating the evidence for and against the overdiagnosis of ADHD. J Atten Disord. 2007;11:106-113 and  Getahun D, Jacobsen SJ, Fassett MJ, Chen W, Demissie K, Rhoads GG. Recent trends in childhood attention-deficit/hyperactivity disorder. JAMA Pediatr. 2013;167:282-288.)

Most clinicians have expressed surprise at that high a number (9.5 percent). Without a more centralized system of data-gathering, such as with a national health system, this is how the CDC chose to gather data.

There are other, more reliable and scientific methods of arriving at these statistics. I include some below.

I’ll give Wedge that one. French parents do, at least traditionally, seem to provide more structure and discipline for their children. That’s true especially when compared to the U.S., with (it must be said) its increasingly lax parenting attitudes and lack of disciplined routines. In France, behavioral expectations also tend to be more typically clear, with unruliness little tolerated. In general.

France also has quite a strong safety net, with admirable child support for working families. Moreover, I’m willing to bet the average French child’s diet is much healthier than is the average American child’s.

But does all this means that French kids don’t have ADHD? Or that the structure and discipline they might enjoy in childhood serves to somehow make them higher-functioning for the rest of their lives?

Unfortunately, the facts just don’t bear that out.

Is The French Number “less than .5 percent”?

In the United States, at least 9 percent of school-aged children have been diagnosed with ADHD, and are taking pharmaceutical medications. In France, the percentage of kids diagnosed and medicated for ADHD is less than .5 percent.

That’s a deceptive statement. She is comparing apples and oranges: 1) estimated pediatric ADHD prevalence rates (from parental reports by phone) to 2) the rates of children both diagnosed and taking medication. That’s two clearly separate categories!

As of 2013, the best evidence did point to .5% as the estimated number of French children both diagnosed with and medically treated for ADHD.

In truth, French children do have ADHD—with France’s prevalence rate being similar to that of other countries: 3.5 to 5.6 percent.  It’s important to note that diagnostic criteria for such purposes are applied very conservatively. Therefore, it’s likely to account for the more severe cases of ADHD.  On the clinical level, there is more leeway to interpret the criteria in light of the individual’s challenges.

With this post, I’m not offering a point-by-point counter to Wedge’s claims. Most of her claims can be easily discounted by anyone having a passing familiarity with ADHD. Moreover,  her book titles clearly show her anti-psychiatry bent.

I am focusing on two points here:

1. Epidemiology: French Kids Have ADHD—Adults, Too

Thank goodness we have more than the opinion of an alleged therapist when it comes to examining the prevalence of ADHD in France. We have skilled, experienced researchers such as Stephen V, Faraone. He is the third most highly cited researcher in psychiatry and psychology.

In 2003, Faraone and colleagues published a review of 50 epidemiologic studies. They found the mean prevalence of DSM-defined ADHD to be similar around the world (Faraone, Sergeant, Gillberg, & Biederman, 2003). That result was confirmed by a meta-analysis of epidemiologic studies (Polanczyk, de Lima; Horta, Biederman, & Rohde, 2007).

Faraone later joined other colleagues to publish  Prevalence of Attention Deficit Hyperactivity Disorder and Associated Features Among Children in France in a 2011 issue of Journal of Attention Disorder.

Here is the paper’s conclusion:

The epidemiology of ADHD in French children is similar to the epidemiology of ADHD in other countries. The disorder occurs in between 3.5% to 5.6% of youth and is more common among boys than among girls. The authors replicate the well-known association of ADHD with CD, ODD, and indices of school failure. The impact of ADHD symptoms on school performance highlights the importance of screening for such symptoms in schools.

In the paper itself, the authors write:

The fact that there were no pre-existing prevalence studies of ADHD in childhood in France proves only that it hadn’t been studied, not that it doesn’t exist. 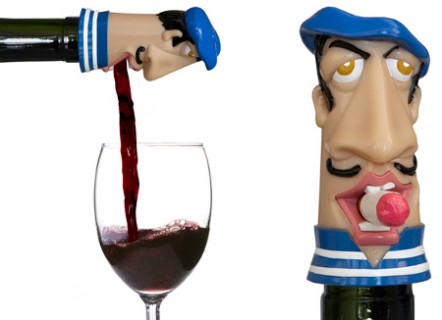 2. Rates of Substance-Related Deaths in France

A sampling from news outlets:

subtitle: “The reputation of the French for drinking in moderation appears slightly misleading after a worrying report released on Monday revealed alcohol is responsible for around 49,000 deaths in France each year – around 134 each day.”

An excerpt from the article, based on the study Alcohol-attributable mortality in France:

According to the report published by the European Journal of Public Health, alcohol consumption was responsible for the deaths of around 49,000 people.

Catherine Hill, one of the authors of the report summed up the findings simply by saying “the French drink too much”.

The stats, based on the year 2009,  revealed that three times as many French men died as a result of an alcohol relate health problem than women.

The study, carried out by the Service for Biostatistics and Epidemiology at the Institue Gustave Roussy, near Paris found that around 36,500 French men die each year from alcohol-related illnesses, around 13 percent of the overall male mortality rate….

Perhaps the most worrying trend the survey revealed was that 40 percent of those deaths were people under the age of 65.

France’s Unhealthy Statistics: A new report has shattered the image of France being a healthy nation despite its fondness for drinking and smoking

The findings reveal that the widespread perception of the French as a healthy nation is rapidly becoming outdated.

A government study, published this month, showed that France’s male population has the highest level of cancer-related death of any country in the EU. Scientists concluded that the soaring death rate was directly attributable to the excessive consumption of tobacco and alcohol.

Figures showed that 20% more French men die from cancer each year than British, while Sweden has the EU’s lowest male mortality rate from cancer in the EU, with 196 deaths per 100,000 compared to France’s 283.3.

According to figures collated from 1999, the most recent year for which statistics are available, France has a far larger number of deaths from mouth, lip, throat, liver and lung cancers than neighbouring countries: a clear indication of the disease’s roots in unhealthy lifestyles.

The Psychoanalysts’ Lock-Hold in France

The researchers cited above do not mention that psychoanalysis has long dominated in France— far past the time when neuroscience came to inform psychiatric treatment in the United States and Canada. Perhaps it comes down to the extremely entrenched (some would say paralyzing) French bureaucracies. My French sources tell me that, no matter what your psychiatric issue, you are first offered psychoanalysis.

Yes, even for autism.

No matter how much the French National Health System is praised—or how great it is—how do we regard a system as truly great that censors the predominance of published literature documenting the seriousness of ADHD? And autism.

A rare critical exposure of France’s virtually closed-system came about in the 2012 documentary Le Mur, or The Wall, as reported in The New York Times‘ “A French Film Takes Issue with the Psychoanalytic Approach to Autism.”

The documentary, the first film by Sophie Robert, follows two autistic boys: Guillaume, who has been treated with the behavioral, or “American,” approach; and Julien, who has been kept in an asylum for six years and treated with psychoanalysis. Guillaume, though challenged, is functioning at a high level in school. Julien is essentially silent, locked out of society.

What is really happening to French children and adults in France who have ADHD? That remains to be studied. Perhaps the strong (but rapidly eroding) social safety net is providing a degree of support. Or perhaps it is keeping them locked in a system that fails to give them greater autonomy and self-actualization—and lets them smoke and drink themselves to death.

Please see a later piece, Vive La France! But Adieu To Its Abusive “Psychiatry”, in which I examine the highly troubling roots of modern French psychiatry: a neo-Freudian figure named Jacques Lacan.