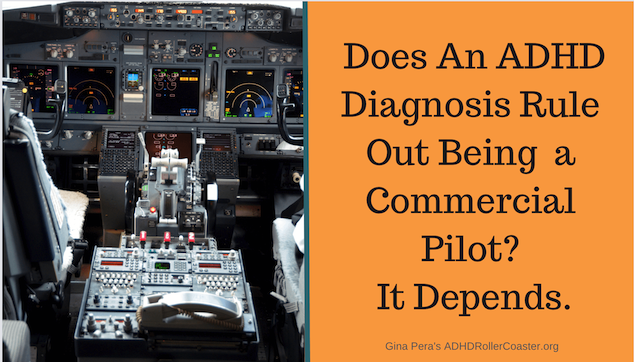 This post explores FAA policy guidelines on ADHD. Specifically,  being a commercial pilot while having ADHD and taking medications to treat ADHD symptoms.

Originally published in 2012 and updated February 2022,  it’s one of my most perennially popular posts. I try to keep it updated. So if you have new information, please share in a comment. At the end, I’ll share a January 2022 FAA Safety Briefing article.

It’s common lore that folks with ADHD gravitate to flying planes. I’ve seen no scientific research.  But I have fielded enough questions to suspect it!  There are two common themes in these e-mails:

Let’s consider an example of each theme.

This common question came from the spouse of a commercial airline pilot. Her husband has an ADHD diagnosis. From her report, symptoms manifest strongly at home. This is increasingly true with age. (He’s in his 40s.) She says he forgets tasks, loses track mid-task, and forgets conversations. His temper flares up a lot these days.

Perhaps most disturbingly to her, given poor sleep’s known negative impacts on cognition, his sleep was erratic and typically too short in length. She worries.

She asked, “Do FAA guidelines truly prohibit him from taking medication for it?”  The answer is: Yes, truly.

Another common example comes from a young man, age 23.  He was diagnosed two years ago.  Becoming a pilot is his lifelong dream.  He rails against this prohibition as absolutely unfair. Seeing the clear disappointment on his face is heartbreaking.

Yet, I also saw how impaired he was before beginning stimulant medication:

With medication, he became sharper and more alert. His working memory became much-improved. working memory. The difference truly was night and day.  Did he realize how differently he appeared, compared to the somewhat stoned-looking presentation earlier?

If he stopped taking medication, would being in the cockpit somehow “stimulate” him into higher functioning?  I’m unlikely to bet my life—or his—on it. The much-ballyhooed ADHD Hyperfocus? Not all it’s cracked up to be.  Moreover, it’s certainly not reliable. In fact, hyperfocus is a clinical term. It means dysregulated focus.

Let’s remember: ADHD is a highly variable syndrome. Moreover, it affects individuals. Many also have ADHD-related sleep disorders that impair cognition all on their own. There are no cookie-cutter descriptions, answers, or strategies. So, if you think hyperfocus is your superpower, good for you. But please know, people with ADHD are not clones.

This young man received his diagnosis as an adult, after a thorough and professional evaluation. What about potential pilots whose diagnosis as children was more informal?  It might be worth re-visiting.

As best I can make out, this is the bottom line for potential pilots with ADHD:

Q: Why a required neuropsychological evaluation?

Q: What is the required testing?

There are two test batteries:

CogScreen-AE is a neurocognitive test developed to assist the FAA in the evaluation of the domains of neurocognitive performance most important for safety of flight.

Q: Who may perform a neuropsychological evaluation?

A recent Medium article on this topic comes from two psychologists with the FAA Office of Aerospace Medicine, Drs. Chris M. Front and Randy J. Georgemiller

Safety experts agree that at least 70% of aviation accidents are attributable to the pilot. NASA scientists report that most accidents result from some failure in the pilot’s cognitive performance, with distractions and errors in aeronautical decision making (ADM) most prominent….

…The likelihood of an accident rooted in distraction or poor ADM is heightened when the pilot has a condition that negatively affects such skills….

NTSB investigations of fatal accidents attributed to ADHD have documented that pilots with ADHD:

Due to the risks to flight safety posed by ADHD, regulatory authorities worldwide consider ADHD a disqualifying condition for pilots.

“Disclosure” After the Fact

One more excerpt from that article:

The result is that the FAA learns about the condition after a fatal accident when the toxicology results reveal the presence of medication used to treat ADHD. Notably, pharmacological treatments for ADHD are not approved for flying because they can cause harmful effects on perceptual, motor, and cognitive functions and impair the recognition of fatigue.

Additionally, their effectiveness is time-limited, a particular concern if a dose is missed or flight time exceeds the therapeutic impact of the drug.

ADHD and Driving On the Road

One area of research that clearly demonstrates ADHD-related impairments — and the effectiveness of stimulant medication?  Driving.

This post explores that topic: Driving While Distracted: Adult ADHD Hits the Road

If you have personal experience or something else to share on this topic, please leave a comment.

67 thoughts on “FAA Guidelines on ADHD — No Rx for Commercial Airline Pilots?”