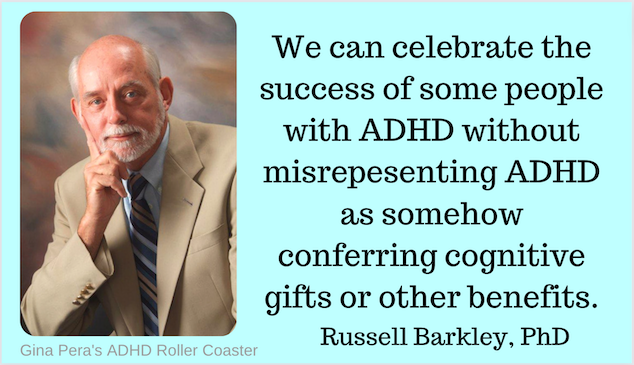 Does ADHD truly confer greater creativity? If you get your science news only from your Facebook feed, you might think so. The truth is more complicated.

Recently, preeminent ADHD research scientist Russell Barkley and I simultaneously commented on an extremely misleading article on this topic. It was  at the Scientific American website, not a staff-written piece but rather from a contributor. I’ll share our responses below.

But first. Understanding complex issues requires complex thought—and tedious research. The online world, however, skews towards simplistic opinion—and clickbait. Even academics in the field of psychology with little training in hard science fall short of rigorous thinking on scientific topics.

The Two ADHD Worlds: The Real and the Online

1. In the “real” world, ADHD-focused clinical and scientific investigators toil in the trenches. They have little time or inclination for blogging or writing op-eds. (As if The New York Times and most other online news organizations ever showed interest in legitimate ADHD experts).

2. In the “online” world, unqualified self-promoters spin their sketchy—but quite attention-getting—theories.

If we read or view only sensationalism from the charlatans, we might never see the Mack truck-sized holes in their arguments. To make matters worse, these charlatans often go “viral.” Like a virus, their harmful distortions risk insidiously further weakening the public’s understanding of this highly variable condition called ADHD.

Years ago, I asked readers to name the most irksome ADHD myth they hear (Annoying Things People Say About ADHD). The creativity bit came up—prominently.

I’ve seen even people with ADHD who have benefited from medication applaud these charlatans. They seem to take for granted  ADHD’s status as a legitimate condition that confers proper treatment.  They fail to see the connections between the charlatans’ propaganda, public opinion, and public policy.

I cannot counter all the logical, factual flaws in all the pieces about ADHD online. It was easier in the early days. There was less of it but still time-consuming.  Now, we seem to be drowning in it. So, I try to be selective.

“The Creative Gifts of ADHD”

For example, consider this problematic piece published on Scientific American’s site: “The Creative Gifts of ADHD”. Many readers will conclude, “Oh, it’s Scientific American, so it must be true.”  Alas, even venerable institutions now compete in the clickbait world. As a result, they compromise editorial integrity by accepting free content from “guest” authors. The more clickbait’ish the title, the more the traffic.

The website does, however, include this tiny, hard-to-find disclaimer: The views expressed are those of the author and are not necessarily those of Scientific American.

The author reposted the piece a few weeks later on Alternet.org. This time, it sported an even more provocative clickbait headline: ADHD Brains Are the Most Creative: Why Do We Treat It Like a Disability?

The headline provides the reader’s first clue that the story following will be binary nonsense. That is, this notion that there are “ADHD brains”. Instead, we have millions of individuals who have various manifestations of a highly variable syndrome, along with endless variations on other human characteristics. By the way. creativity is a human characteristic.

After I left a comment at Scientific American, I read other comments.

To my surprise, Russell Barkley, PhD, a preeminent research scientist in the realm of ADHD, had already left a comment. He has given me permission to re-print it here. Please share this on Facebook, Twitter, in personal e-mails, or whenever you need a solid counter to the online nonsense. Instead of dumbing-down the dialogue around ADHD—thus losing intelligent people—we do better to emphasize the complexities of the human brain.

Despite repeated assertions by trade book authors on ADHD, especially in adults, and now the author, Mr. Kaufman, the entire body of evidence available on any link of ADHD with increased creativity does not support such a link. What it does show is that people with ADHD range across the entire spectrum of creativity, variously measured, as does the general population. But there is no significant correlation between ADHD or its symptom severity and increased creativity.

This does not mean that some people with ADHD are not creative, for some surely are. It means that such creativity, among many other psychological abilities, comes not simply by virtue of the person having ADHD. Cherry-picking cases of creative people who have ADHD is not evidence of such a link. It is tantamount to selecting red-headed people with ADHD and then asserting that there is some important association between the two. Such anecdotes are not evidence.

Also noteworthy in Kaufman’s post: The apparent scientific citations marshaled to support the assertion that ADHD is related to increased creativity show no such thing. Indeed, several of the scientific papers found just the opposite or were not of studies of ADHD and creativity at all.

For instance, one article (the second citation) is simply a study of the link between mildly lower levels of cognitive inhibition and creativity, which does not focus on ADHD at all. Yes, somewhat lower levels of mental inhibition have a small but significant association with generating a wider diversity of ideas, but this refers to rather small decreases in inhibition in the typical population, not to clinically severe levels of impulsivity as seen in ADHD.

As another example, one of the other studies cited (by Zentall) had nothing to with creativity but rather with production deficits associated with ADHD.

And, the fourth citation is not a study of creativity in ADHD but of social cooperation and rule-following.

One could go on dissecting the list of supposedly supportive citations about ADHD increasing creativity but this should make the point: Such evidence is thin.

Most studies of ADHD that actually measured creativity did not find any such link and a few found the disorder to decrease certain kinds of creativity.

Focusing on the one study of gifted ADHD participants and their somewhat better creativity relative to other gifted but non-ADHD people hardly provides overwhelming support for the author’s thesis. The fact that all were gifted to begin with precludes generalizing these results to all people with ADHD.

This sloppy scholarship and highly selective citation ignore the disconfirming studies. To get a better research sampling as well as several reviews, use Google Scholar to search the science journals for studies on this issue.

The totality of such evidence refutes the author’s thesis. ADHD is a serious neurodevelopmental disorder associated with impairments in multiple domains of major life activities. While some with the disorder may function well in some areas of life (e.g., Michael Phelps and swimming, Ty Pennington and destroying and rebuilding houses, Glenn Beck and political commentary, etc.), they often have struggles with other areas of functioning (DWIs, managing money, social relationships, etc.).

But even if well-adjusted, these unusual success stories do not represent the more typical outcomes of children with ADHD followed to adulthood, as I found in my own Milwaukee longitudinal study and as evident in all other longitudinal research.

We can celebrate the successes of some people with ADHD without misrepresenting the disorder as somehow conveying cognitive gifts or other benefits, which it clearly does not.

In more than 10,000 scientific studies now published on the disorder, none found that ADHD conveyed some increased benefit in mental functioning or psychological abilities beyond what is found in the general population not having ADHD. In nearly all instances where differences in the ADHD group were noted, they were deficits, not advantages.

Let Us Celebrate Successes, Not Romanticize an Impairing Condition

Kauffman closes his piece with this:

Consider the case of John, who in 1949 attended Eton College and dreamed of becoming a scientist. However, last in his class, he received the following comment on his report card:

“His work has been far from satisfactory… he will not listen, but will insist on doing his work in his own way… I believe he has ideas about becoming a Scientist; on his present showing this is quite ridiculous, if he can’t learn simple biological facts, he would have no chance of doing the work of a Specialist, and it would be a sheer waste of time on his part, and of those who have to teach him.”

This remark refers to Sir John B. Gurdon, winner of the 2012 Nobel Prize in Physiology or Medicine for his revolutionary research on stem cells. Like so many other highly creative, competent individuals, he might have been referred for testing and given the label “attention deficit hyperactive disorder”.

Hypotheticals about Nobel laureates are just that, hypothetical. It is hardly a confirming instance that Gurdon had ADHD, would have been diagnosed as such, or that creative people are at higher risk of being improperly diagnosed with ADHD.

By all means, let us celebrate, encourage, and support the talents of individuals. But let us not romanticize them as arising from a serious neurodevelopmental disorder such as ADHD. This does a great disservice to the many others with the disorder who struggle daily to cope with and compensate for its significant adverse impact on their lives.

Dr. Russell Barkley: When ADHD Kids Grow Up – Reviews and endorsements of his research team’s pivotal book,  ADHD in Adults: What the Science Says.

Hey CDC, Why Misinform on ADHD?

Background: The U.S. Centers for Disease Control (CDC) has been promoting therapy before medication for young children with ADHD. Sounds reasonable, eh? Except it’s not.  A guest post below from Dr.  Barkley explains the details.

14 thoughts on “Russell Barkley on ADHD and Creativity”