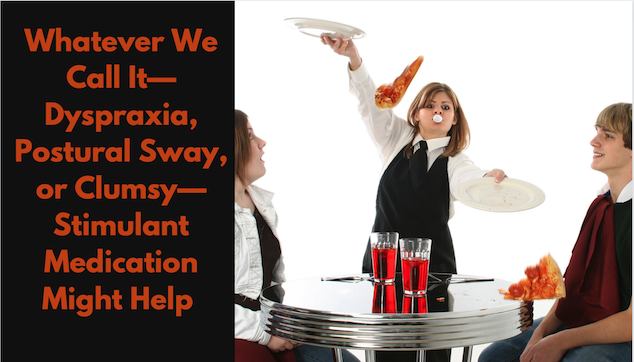 Recently, my 2015 post on ADHD and Postural Sway shot to this blog’s #1 most-visited. This newfound interest in Postural Sway motivates me to share  more fascinating research details with you on this important topic.

Details include the possibility that methylphenidate (the active ingredient in Ritalin, Concerta, etc.) can help offset such physical challenges. For people with ADHD and maybe others, too.

But first, why the recent upsurge in interest?  A friend in Mexico City tells me it’s due to a Tik-Tok video. In it, a woman with self-proclaimed ADHD demonstrates cat-like agility, smoothly weaving through her apartment, dodging tight obstacles and sailing through hairpin turns, until…she bangs into a coffee table for no apparent reason. That’s ADHD for you: Predictably unpredictable.

To the last point, we know that first-degree relatives of people with ADHD have elevated symptoms, even if not at a diagnosable level. That means  millions of other people with balance issues might benefit from stimulant medication. Including the elderly. 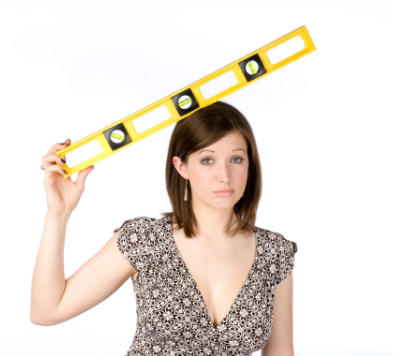 ADHD By Any Other Name:  Dys- and That

We’ve long known that medication can help certain ADHD-related issues with fine-motor control. For example, some parents  clearly see a child’s handwriting devolve into indecipherable loops and scrawls as the child’s ADHD medication wears off.

Other parents tell me of their child’s diagnosis,  dysgraphia. I always ask: “Has your child had an ADHD evaluation? Because this might be a treatable, ADHD-related issue.”

There can be other neurological contributors to dysgraphia, some are not treatable. Therefore, the distinction is important. Why attempt to treat dysgraphia —with physical therapy, for example—when the child also has many other ADHD-related challenges not responsive in any way to that treatment?

Here’s a major problem, though: medical and educational “silos”. That is, different specialties have different terms, causes, treatments, and longterm outlooks for the same issue. This makes for poor “cross-disciplinary” unity.

Dysgraphia is one of those terms.  But there’s also dyscalculia (math) and dysxlexia (reading).  All three are more highly associated with ADHD.

We could keep going, into the non-dys terms, such as sensory processing disorder and auditory processing disorder. These terms come from other fields (i.e. occupational therapy and hearing/speech therapy).  Yet, both disorders are associated with ADHD. And, evidence suggests, both tend to respond positively to ADHD treatment. In such cases, consider them not entirely separate conditions but rather downstream effects of untreated ADHD. As with postural sway.

Let’s return to dysgraphia. Specifically, might stimulant medication truly improve this fine-motor disorder? And, if so, what that means for larger coordination issues?

This brings us to the umbrella term under which dysgraphia falls: Developmental Coordination Disorder (DCD) (also known as dyspraxia). That was the subject of my 2015 post, Research: ADHD, Balance, and “Postural Sway”

Informally defined: a neurodevelopmental disorder characterized by impaired coordination of physical movements as a result of brain messages not being accurately transmitted to the body.

Results demonstrated that children with ADHD-DCD performed more poorly on the manual dexterity subtests, had poorer quality of handwriting, and drew more rapidly, more fluently, but less accurately than controls on the graphomotor task. On methylphenidate , manual dexterity and quality of handwriting improved, and strokes on the graphomotor task became less fluent but more accurate….

Up to 50% of children with ADHD also have motor coordination problems that are severe enough to meet criteria for DCD. In DCD, children demonstrate functional motor performance deficits not explained by the child’s (chronological) age or intellect, or by other neurological or psychiatric disorders.

We assessed the influence of methylphenidate on motor performance in children with comorbid DCD and ADHD. Participants were 30 children (24 boys) aged 5.10-12.7 years diagnosed with both DCD and ADHD. …

…Motor performance and attention scores were significantly better with methylphenidate than without it (p<0.001 for improvement in the Movement Assessment Battery for Children-2 and p<0.006 for the online continuous performance test scores).

The findings suggest that methylphenidate improves both attention and motor coordination in children with coexisting DCD and ADHD.

More research is needed to disentangle the causality of the improvement effect and whether improvement in motor coordination is directly affected by methylphenidate or mediated by improvement in attention.

MPH improves postural stability in ADHD, especially when an additional task is performed. This is probably due to enhanced attention abilities, thus contributing to improved balance control during performance of tasks that require attention. MPH remains to be studied as a potential drug treatment to improve balance control and physical functioning in other clinical populations.

I’ll leave you with one more fascinating nugget. What about ADHD and motor function that allows coordination with others?  That brings us to one paper I found particularly interesting.

As it happens, one of the authors also wrote a paper that previously snagged my attention: Theory of mind and empathy in children with ADHD

My friend had reported an increase in empathic behaviors when her oldest daughter started stimulant medication for ADHD symptoms. She wrote this post:  ADHD & Lacking Empathy: Was I Raising a Narcissist?

Before we get to the paper, we need to define the term interpersonal synchrony.  Here’s one discussion from a 2020 paper in Social Cognitive and Affective Neuroscience:  A syncing feeling: reductions in physiological arousal in response to observed social synchrony

Interpersonal synchrony is a specific form of movement coordination that has captured recent attention, especially that of social, music cognition and developmental psychologists.

Experiencing interpersonal synchrony firsthand has been shown to facilitate social bonding and prosociality. Adults rate one another as more likeable, and help, trust and cooperate with one another after moving synchronously compared with asyn- chronously (Hove and Risen, 2009; Wiltermuth and Heath, 2009; Kokal et al., 2011).

Finally, we put forward evidence linking dopaminergic modulation by the administration of methylphenidate to improvements in both motor and social domains.

I always welcome your comments. Thanks for visiting!

8 thoughts on “Can A Stimulant Improve Postural Sway?”