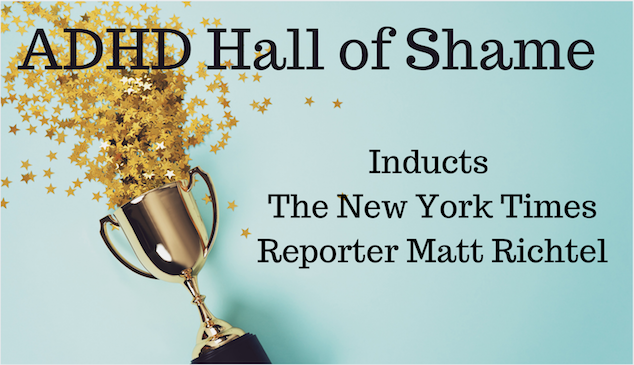 The New York Times Silicon Valley technology reporter Matt Richtel won a Pulitzer Prize for his series “Driving While Distracted” without ever mentioning ADHD.  How does that happen?

I congratulate him on the Putlizer. Yet, for or any science-based reporter who dips the tiniest toe into the research, the evidence is clear: ADHD-related driving impairments are real and documented many times over.  These are life-threatening impairments.

A bit of background: I had written to Richtel numerous times over the years explaining the substantial research in this area, as highlighted in my book chapter on the topic:  “Driving to Destruction.”  (Yes, many people with ADHD drive very well;  when it comes to research, though, we’re talking significant trends within a group, not individuals.)

Because he was based here in the SF Bay Area, I also invited him to sit in on our Silicon Valley Adult ADHD Salon in Palo Alto. That way, he could hear first-hand, from many different adults, how ADHD symptoms had threatened their driving safety.   No response—to telephone or e-mail.

It beggars belief: How could anyone who’s written such a series never mention ADHD, even now as he makes the PBS-radio rounds promoting his new book?  I consider that as reckless as distracted driving itself. As a reporter, he has withheld from the public information that could  not only reduce traffic accidents but also even save lives.

(Yes, last year I gave his series an ADHD Roller Coaster Salute when posting notice of it here, for bringing attention to the dangers of distracted driving, but I had hoped by now that he’d at least give ADHD a nod.)

Now I am listening to Richtel talk about his new book, on the brain and technology, with Terry Gross on Fresh Air. Waiting. Waiting. Nope. No mention. 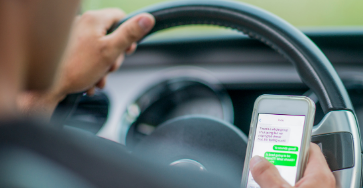 I read his story in The New York Times today— “Digital Devices Deprive Brain of Needed Dopamine”. Good grief!  He even quotes ADHD Expert Dr. John Ratey but not on ADHD!  How can you write a story about digital devices and dopamine and not include a sentence on ADHD? Especially when you have interviewed Dr. Ratey?

It’s true, ADHD is not the sole cause of “driving while distracted” or our culture’s increasingly problematic relationship with all things electronic (the subject of his book).

Moreover, it’s not breaking news that the dopamine flood that comes from overusing electronic gadgets isn’t good for anyone’s brain, ADHD or not. (The scientific thinking is, simply put, this flood down-regulates dopamine receptors and sets the pattern for addiction. See, in the context of orgasmic sex perhaps intensifying ADHD symptoms, this post: ADHD and Sex: Post-Orgasm Irritability, Jerkdom.)

But to pretend that all brains are created equally. To ignore the fact that a signification percentage of the population he is reporting on —the ones with ADHD, most notably—are far more vulnerable to technology’s harmful effects?  And, of in all places here in Silicon Valley, aka ADHD Central?

A Conspicuous Lack of ADHD In His Reporting

It all reminds me of the time that the poet Robert Lowell, seated beside me at a dinner given by a college chancellor, turned to me and whispered, “There’s a conspicuous lack of alcohol at the chancellor’s home tonight.”

That’s it exactly: I see a conspicuous lack of ADHD in these stories.

Why exactly does Richtel refuse to ever mention ADHD when it is entirely appropriate?

Living in Silicon  Valley since 1996, I think I can guess. That is, he is relying solely on medical experts at our two local medical schools: the University of California, San Francisco and Stanford University. Each takes turn outdoing the other in its shocking paucity of ADHD expertise. It’s not paranoia to say that it often seems deliberate, even territorial, given each university’s specialties that bring in big grants (e.g. bipolar disorder, sleep disorders in the case of Stanford). Yes, in fact, Richtel plentifully cites Stanford research.

Whatever the reason for the failure to make a mention of ADHD throughout this series of articles, I find it irresponsible and blinkered reporting.  Therefore, it deserves a place in the ADHD Roller Coaster Hall of Shame.

What do you think?  I welcome your opinion.

5 thoughts on “Writing about “Distracted Driving” Without Mentioning ADHD?”