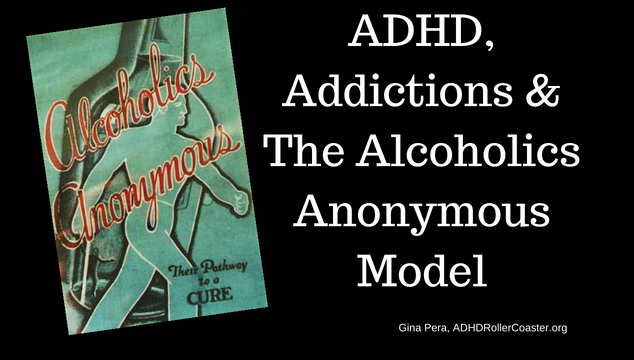 Almost 30 years ago, I attended my first meeting of Alcoholics Anonymous (AA). It wasn’t for me but for my roommate. She went only to snag a good seat for the next meeting that night: Overeaters Anonymous. I tagged along as moral support.

What struck me most about the AA meeting—and remains remarkable to this day—is the many people there that night who likely had ADHD.

That’s in retrospect, of course. Back then, I’d never heard of ADHD, not even in children. But there had to be some explanation, I remember thinking. Look at how most of these folks can’t seem to sit in their chairs; they’re constantly getting up to get coffee or go outside to smoke cigarettes. They just seemed so…fidgety.

At the meeting’s end, I chatted with the lady seated next to me. She knowingly explained: “They can’t sit with their feelings, so they keep distracting themselves.”

“Huh,” I thought. What did I know? Maybe that was true, for some. But for the others, well, that was the most fidgety collection of people I’d ever seen. (Note: This was before I’d attended my first CHADD conference lectures. Ha!)

Of course, now I get it. For the last 18 years, at least.  People with ADHD are more vulnerable to addictive substances and activities of all types.

As Meg wrote in her poems in On Trying to Swim Blind: ADHD and Medication:

Still, something in me keeps pushing –
“Faster-straighter-GET there,”
until I am breathless behind the wheel
thinking nothing but gin
could melt this cluster-f*%# tangle:

In the last decade, many scientific papers have studied various aspects of this vulnerability—and how to reduce it. Surprise! One way to protect children with ADHD from that poor outcome is by treating ADHD early. Isn’t that just the opposite of what many in the public think?

Consider this one from 2017: “ADHD medication tied to lower risk for alcohol, drug abuse in teens and adults”

The use of medication to treat attention deficit hyperactivity disorder is linked to significantly lower risk for substance use problems in adolescents and adults with ADHD, according to a study led by researchers at Indiana University.

The risk of substance use problems during periods of medication use was 35 percent lower in men and 31 percent lower in women in the study. The results, based upon nearly 3 million people with ADHD in the United States, are reported in the American Journal of Psychiatry.

“This study contributes to growing evidence that ADHD medication is linked to lower risk for many types of harmful behavior, including substance abuse,” said Patrick D. Quinn, a postdoctoral researcher in the IU Bloomington College of Arts and Sciences’ Department of Psychological and Brain Sciences, who led the study. “The results also highlight the importance of careful diagnosis and compliance with treatment.” 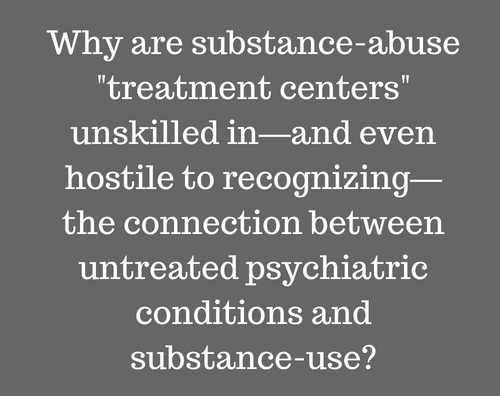 Count on it: ADHD was over-represented in that room.  No doubt ADHD scampers through thousands of other AA-centered rooms, including private substance-use clinics. Unfortunately, many of those clinics woefully over-rely on their interpretations of AA—and under-rely on addressing underlying psychiatric or neurocognitive challenges.

So yes, I get it now: the potential neurobiological underpinnings of addiction, that is. So why don’t many substance-abuse treatment centers get it? The vast majority of them still base their programs on the AA model, established almost a century ago.

No doubt: AA might have been the best (if not only)  alternative for several decades. Absolutely, AA groups still help people, including people with ADHD and other conditions.

A reader makes an important point in a comment to this story (which I am adding now):

AA and treatment centers are two separate programs.  Treatment centers base themselves on the 12 step program but is not complete, especially in the enforcement of rules and paying of counselors.
AA is based on spiritual and physiological principles like Carl Jung’s ‘ inner religious experience’ for a psychic change.
I’m an Adult ADHD sufferer.  This is an outside issue, uncovered when alcohol was removed,  and to be addressed by therapy and medication.  Anyone who states AA is an end all is incorrect but AA is for my alcoholism and my ‘alcoholic’ thinking.
It is a good start and once things clear, you can see what outside issues are left, if any,  to be dealt with appropriately.

The provenance of free public groups is one thing.  Substance-abuse treatment centers, often costly, are quite another.

We know more about the brain and addiction. We understand more now. Most importantly,  we have better core treatment for the many underlying conditions that leave people more vulnerable to substance abuse. So why are so many “treatment centers” unskilled in—and even hostile to recognizing—the connection between untreated psychiatric conditions and substance-use?

Too many readers have written to me, sharing heartbreaking stories of their or their loved one’s ADHD-plus going unrecognized but the substance abuse issues therapeutically zeroed in on—and sometimes beaten to a pulp.

I can’t imagine how those folks must have felt. Trapped? Misunderstood? Cursed?

Some people with ADHD start drinking simply to calm the ADHD-fueled “noise” in their head.

Some have told me, “That first drink brings clarity, Gina; I can think. Then it fades, and I keep chasing it. And of course, everything goes downhill from there.”What does it feel like to be told you’re “bad” and you’re “hurting your family” or you “won’t” stop drinking or abusing other substances when you’re just trying to calm the noise—and escape.

Listen,  this is a complicated subject. No one needs to tell me that millions of individuals have found life-saving help in AA and its derivatives. The peer support alone can be profoundly healing.

Yet, for many grappling with underlying neurobiological challenges, AA alone simply does not take them to the finish line. It might even send them backward. Then their families scold them—and they scold themselves—for being “weak” and relapsing. For failing. For choosing the substance over family.

Joseph Biederman, a preeminent psychiatric researcher, and his team published this research in 1995: Psychoactive Substance Use Disorders in Adults with ADHD.

More information is needed to further delineate risk and protective factors mediating the development of substance use disorders in persons with ADHD.

This is the 21st Century! Let’s put our knowledge into practice and stop torturing people! 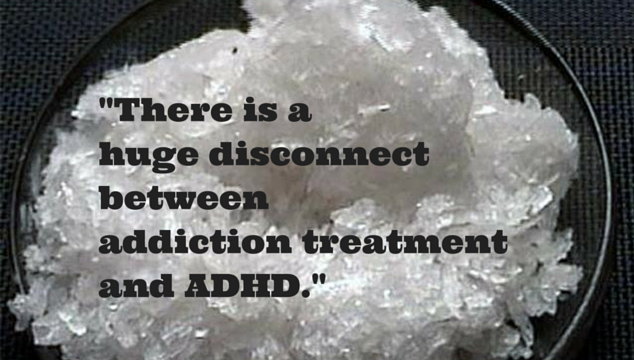 These patterns aren’t limited to alcohol abuse. For people with ADHD who become addicted, choice of substance varies.

Methamphetamine is surely a temptation for many people with undiagnosed ADHD, especially in rural areas with no access to psychiatric care.

Consider this previous post:  “I Was Addicted to Meth When I Was Diagnosed With ADHD”.  Excerpt from the post, which came as an e-mail message to me:

I’m not sure if you remember me but I met you at the CHADD convention in DC in 2013.

I was the mess of a drug addict who walked in 45 minutes late, in tears, and I was desperate for help. You were one of the people who helped me that day, and I’m grateful for you taking the time to speak to me.

I was addicted to meth for 5 years until 2009, when I was diagnosed with ADHD and my psychiatrist put me on Vyvanse. I easily stayed sober for 4.5 years and built a successful career in real estate. At some point before I relapsed, the Vyvanse stopped working. I had no idea until it was too late.

My guess is it lost its effectiveness during the last half of 2012.

In last week’s post, I pointed to the historical role that nicotine has played for many in managing ADHD symptoms: ADHD & Nicotine: Historical Ads.

I found a bit of specific research on ADHD and nicotine. For example, there was this from 1996: Nicotine effects on adults with attention-deficit/hyperactivity disorder.

I can find no studies making a direct connection between ADHD and opiod addiction. But I have met more than a few people with ADHD who succumbed. It typically starts with a legitimate use of the opioids. The “abuse” continues because, these adults tell me, they feel so much more focused and “clear” on the opiods.

This study’s findings contradict many prescribing physicians’ ideas about not treating for ADHD among those who are active opioid users.  Published in the Journal of Dual  Diagnosis, “Stimulant medication for ADHD in opioid maintenance treatment” drew this conclusion:

These findings show some promise with regard to the safety and utility of central stimulant medications for patients with ADHD who are receiving opioid maintenance treatment. 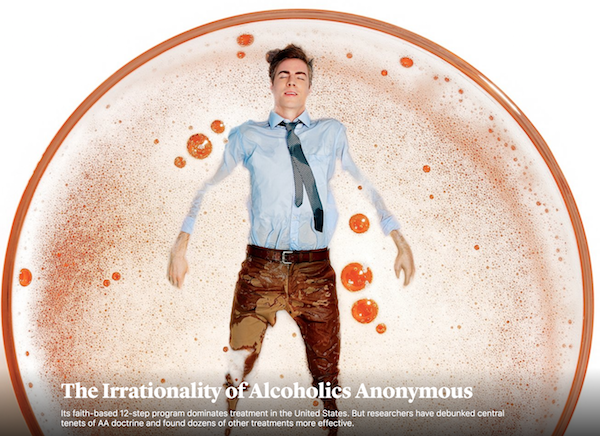 That is why I was so riveted to the radio a few minutes ago. Check out this fantastic NPR interview with award-winning journalist Gabrielle Glaser: “Critic Faults Alcoholics Anonymous for Lack of Evidence.”

An investigative writer on mental-health issues, Glaser is a remarkable spokesperson for this critically important issue. You can listen or read the interview. Some snippets:

There was a book that came out in 2013 called Inside Rehab by Anne Fletcher. [Gina notes: Perhaps Fletcher’s most important finding is the alarming discrepancy between the treatments offered at many rehab centers and the treatments recommended by leading experts and supported by scientific research.]

Her book found that up to 80 percent of all rehabs rely on AA and 12-step treatments as the foundation for their centers. It really has crowded out other voices.

On the criticism she’s received that questioning AA is irresponsible, when so many people say 12-step programs are the only thing that enabled them to quit drinking

I get those messages all the time. My response to that is that this treatment actually can be just as damaging and dangerous for the people for whom it’s failing. AA doesn’t refer anybody out. It doesn’t tell anybody that AA is not for them. It’s very unlike professional organizations, which refer people to second opinions.

AA tells people that if they don’t benefit, it’s basically their fault. This has produced, really, a lot of tragedies. I hear about them weekly. Someone sent me an email this morning about a younger brother who committed suicide last night with the [AA] Big Book and a glass of scotch next to his bed.

Glaser has also just written a powerful piece in the April issue of The Atlantic magazine: The Irrationality of Alcoholics Anonymous.

Subtitle: “Its faith-based 12-step program dominates treatment in the United States. But researchers have debunked central tenets of AA doctrine and found dozens of other treatments more effective.”

Thinking of ADHD, in particular—not to mention its many co-existing conditions—this passage sent a chill down my spine:

He felt utterly defeated. And according to AA doctrine, the failure was his alone. When the 12 steps don’t work for someone like J.G., Alcoholics Anonymous says that person must be deeply flawed. The Big Book, AA’s bible, states:

Rarely have we seen a person fail who has thoroughly followed our path. Those who do not recover are people who cannot or will not completely give themselves to this simple program, usually men and women who are constitutionally incapable of being honest with themselves. There are such unfortunates. They are not at fault; they seem to have been born that way.

Glaser’s work is an important read.

Have you or your loved ones with ADHD struggled with substance-use issues?

If treatment was sought at a substance-use treatment center, how did that turn out?

I welcome your opinion and experience as it relates to this issue.