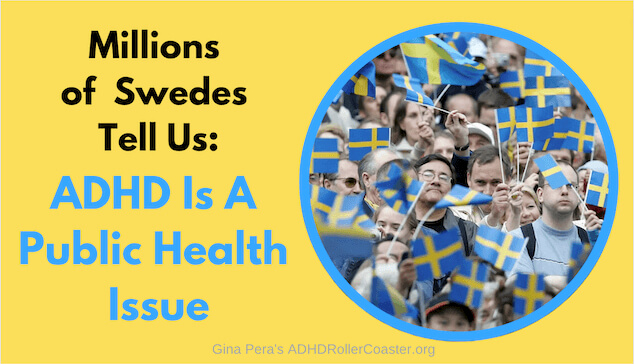 Adults with ADHD face higher health risks of a wide range of physical conditions. That includes nervous system, respiratory, musculo-skeletal, and metabolic diseases. These research findings come from a large register-based study from Sweden’s Karolinska Institute. It was published July 6, 2021 in The Lancet Psychiatry.

No, this isn’t the first evidence pointing to the very real physical risks of ADHD. That’s in terms of genetics and lifestyle issues. Yet, it does underscore the importance of viewing ADHD with more respect as a public health issue— not simply a subjective matter of “focus” or “attention.”

I’ll share more about the study, which included millions of Swedes, in a minute. And, I’ll share my 2005 exchange on this topic with the ever-prescient Russell Barkley, PhD, along with his comment on this Karolinska study.

But first, a little background.

The study findings have seemed obvious to me since the late 1990s. That’s when I first learned about ADHD and started leading discussion groups—both adults with ADHD and their partners (separate groups). Many hundreds of members.

With the “partners of” group, I’d sometimes ask about their ADHD partner’s physical health, including sleep disorders and diabetes. That’s because these issues sometimes came up in conversation, but only tangentially, as sources of additional worry. Until I suggested a potential connection, most had never thought to connect their spouse’s hypertension, asthma, or sleep disorder to ADHD. And neither did their ADHD partner’s physicians. Many still do not, and that is a problem.

Thomas Insel, then-director of the U.S. National Institutes of Mental Health, spoke at a 2003 ADHD conference I attended. After his talk, I asked him: “We know about the physical health issues associated with depression. Is anyone studying this with ADHD?”

He paused, very thoughtfully, and said, “No, but that’s a very good idea.”

During his tenure, Insel increased focus on studying the genetics of mental health. Currently, he serves as co-founder and president of a non-profit called Mindstrong Health.  According to the website: “We’re a collective of socially-minded creatives, entrepreneurs, musicians, inventors, engineers, doctors, researchers, business leaders, policy wonks, and every-day problem solvers dedicated to building a more supportive world.”

While creating the ADHD Partner Survey, I made sure to include a question on physical health to respondents: the partners of adults with ADHD.

The survey was the first and still only large-scale examination of adult ADHD through the eyes of a spouse or intimate partner. As with all my work over 20 years, it was self-funded.  No pharmaceutical industry support of any kind.   You can read more about it here:  ADHD Partner Survey

Though not “scientific” (for example, no control group), the results made an impression on me. And, published research has since found similar results.   I included other survey findings in my chapter in Dr. Barkley’s clinical guide, Counseling ADHD Couples. 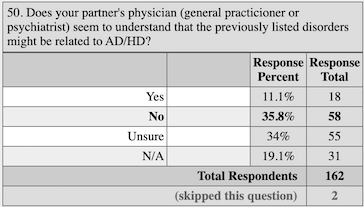 Mid-way through conducting the survey, I discovered Russell Barkley, PhD, a serious scientist who has devoted his career to ADHD. Back then, he was well known among other researchers and clinicians but definitely not consumers. In other words, he was not the YouTube Rockstar he is today.

I wrote to ask him about this topic. Excerpted:

I know about the increased risk of accidents and substance use. Beyond that, it seems that ADHD genetics and “lifestyle” increase vulnerability to various health issues, including hypertension, diabetes, obesity, sleep apnea, prostate cancer (and other cancers promoted by insulin resistance) — even Alzheimer’s.

Could we make a case for ADHD meriting treatment for reasons other than (or in addition to) the psychological/behavioral ones? Perhaps connecting physical maladies to ADHD might decrease resistance to the diagnosis and treatment—and prevent or at least improve treatment outcomes for chronic conditions such as diabetes, hypertension, obesity, etc.

I wrote in my 1998 handbook (first edition of Attention Deficit Hyperactivity Disorder: A Handbook for Diagnosis and Treatment) and in my newsletter that ADHD may reduce life expectancy through its effects on health-related behaviors (increased smoking, drinking, less exercise, poor eating, etc.) which we have documented in follow-up studies along with the more well documented risk for accidental injuries…

My own follow-up study just completed has performed complete physicals and health histories on our ADHD children who are now young adults and will be looking at these issues in some detail. So, that is about the extent of what we know but it’s an intriguing area of research.

That follow-up study featured prominently in Barkley’s 2008 ADHD: What the Science Says. It came as a powerful correction to the prevailing ADHD as Gift media trope that was leading many people astray  (consumers and clinicians).  You’ll see Dr. Barkley’s comments on the Swedish study at the end of this post.

As promised, now for the recent study. You can read the full text at this link:

Mapping phenotypic and aetiological associations between ADHD and physical conditions in adulthood in Sweden: a genetically informed register study

A phenotype is an individual’s observable traits, such as height, eye color, and blood type. The genetic contribution to the phenotype is called the genotype. (from the National Genome Research Institute, part of the U.S. National Institutes of Health)

Simply:  causing or contributing to the development of a disease or condition

For several decades, participants in Sweden’s healthcare system (virtually the entire population, now about 10 million) have been registered in a central data bank. It includes all instances of patient care.

This is a comprehensive, longitudinal database. Among its other uses, it enormously expedites research complex health issues among millions of study subjects. You can read more here: Patient Register 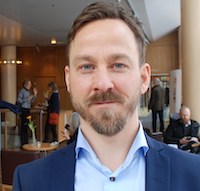 The study’s chief investigator, Henrik Larsson, PhD, is a professor at Orebro University. From Dr. Larsson’s profile, we learn about the approach:

For this study, more than four million individuals (full-sibling and maternal half-sibling pairs) born between 1932-1995 were identified through Swedish registers and followed between 1973-2013.

Individuals with ADHD had a statistically significant increased risk of all studied physical conditions except arthritis.

The strongest associations were:

Worth noting: Full siblings of individuals with ADHD—even if they did not fully meet the ADHD diagnostic criteria— also had significantly increased risk for most physical conditions.

Barkley: ADHD Health Risks “A Fact in the Bag”

When I asked Dr. Barkley to comment on this study, he wrote:

The health consequences of ADHD are now a fact in the bag as is increased early mortality from accidents, suicide, and even homicide in adulthood not to mention my study that found reduced life expectancy

[For a quick summary on that study, subscribers to Barkley’s The ADHD Report can turn to the July 2020 issue.]

The Lancet study, which I obtained two days ago, just corroborates all this, particularly in adults with ADHD and using a population size sample, but most of its findings had already been found in earlier studies.

It’s nice to see all these risks in one place in one large study, though. And to see that many such shared risks with medical disorders seem to be due to shared genetic risk between ADHD genes and the genes predisposing to these conditions, though a few also had non shared environmental factors contributing as well (epilepsy, dementia, etc.).

For other stories related to ADHD research:

I welcome your questions and comments.