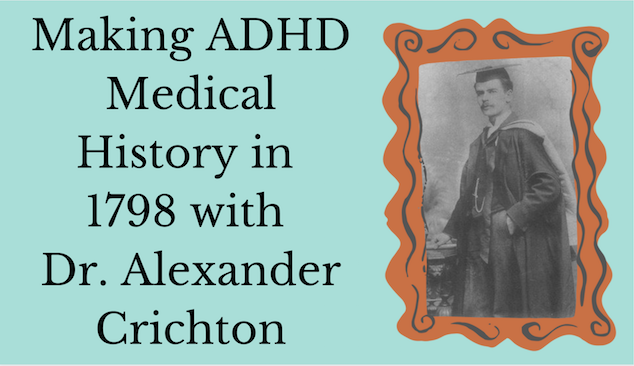 More than two centuries ago, a Scottish physician named Alexander Crichton wrote about ADHD in a medical text. He included the observation that some attention disorders are likely hereditary.

He even remarked upon “the fidgets”—which can be brought about by a barking dog, a poorly tuned organ, or the scolding of women.  (Okay, that last part tells us he was talking mainly about men. But at least it was a start.)

We’ve more recently found earlier evidence of what sounds like ADHD in the medical literature, with Germany physician Melchior Adam Weikard, in 1775. Yet Crichton’s text offers more details.  I’ll share these details below, along with commentary by Russell Barkley, PhD. Then I’ll place Crichton’s writing on the timeline with other medical discoveries.

Until we learned about Dr. Weikard, Crichton (pictured above, at his Cambridge University graduation) provided the first known medical description of disorders of attention in his three-volume medical textbook. (You can read all three volumes here.)

Moreover, “he certainly deserves credit for being the first to describe adults with attention disorders,” says ADHD expert Russell Barkley, Ph.D.. Barkley wrote a commentary about Crichton’s work and its modern relevancies in the February 2009 issue of The ADHD Report. This newsletter follows research and trends in the field of attention disorders.

Until the discovery of Crichton’s three-volume textbook (by the two Washington University researchers who wrote a paper introducing it), most medical historians acknowledged physician George Still as providing the first description of symptoms of what we today call ADHD, in children.

Specifically, in his lectures before the Royal Society of Medicine and later writing for the medical journal Lancet in 1902, Still described 43 children in his clinical practice who had severe challenges with sustained attention and the “moral control of their behavior.”

As Dr. Barkley explains, Dr. Still used the latter phrase to mean “the regulation of behavior relative to the moral good of all. He saw this mental function as a conscious comparative process in which one evaluates both the present and likely future consequences of one’s actions for both one’s self and for others prior to choosing a course of action.”

Both Still and Crichton shared a belief. That is, disorders of attention can be inborn (heredity) or resulting from injury to or diseases affecting the nerves and brain, Barkley writes.

“Also, I think it evident that neither Crichton or Still argued for an entirely social cause for disorders of attention,” Barkley continues. “Though Crichton, discusses the possibility that early education of children can serve to enhance or retard their natural powers of attention.”

At the end of the ADHD Report article, Barkley details some historical milestones pertaining to ADHD in adults. 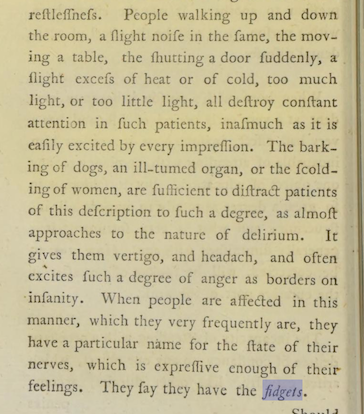 The original print can be difficult to read (the letter s looks like an f), so I’ll transcribe:

In this disease of attention, if it can with propriety be called so, every impression seems to agitate the person, and gives him or her an unnatural degree of mental restlessness.

People walking up and down the room, a slight noise in the same, the mowing stable, the shutting a door suddenly, a slight excess of heat or of cold, too much light or too little light, all destroy constant attention in such patients, inasmuch as it is easily is exited by every impression.

The barking of dogs, an ill-tuned organ, the scolding of women, are sufficient to distract patients of this description to such a degree, as almost approaches to the nature of delirium. It gives them vertigo, and headach(sic), and often excites such a degree of anger as borders on insanity.

When people are affected in this manner, which they very frequently are, they have a particular name for the state of their n serve, which is expressive enough of their feelings. They say they have the fidgets.

Crichton noted that they have a particular name for the state of their nerves, which is expressive enough of their feelings: They say they have the fidgets.

ADHD in Timeline of Medical Milestones

To see where ADHD might fit in a timeline of other medical milestones, consider these examples (from the InfoPlease Medical Advances Timeline). I added Crichton’s work and, in 1944, the “Amphetamine Epidemic”—which might be one reason for the lingering stigma against stimulant medication. 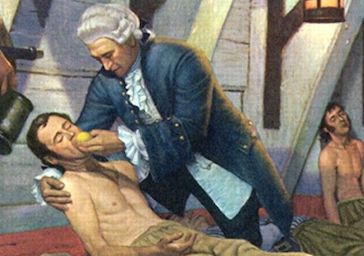 James Lind, a Scottish naval surgeon, discovers that citrus fruits prevent scurvy. He publishes his Treatise of the Scurvy in 1754. In it, he identifies the cure for this common and dangerous disease of sailors. Yet, it takes another 40 years before an official Admiralty order dictates the supply of lemon juice to ships. 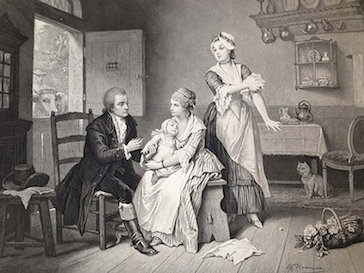 Edward Jenner develops a method to protect people from smallpox by exposing them to the cowpox virus.

In his famous experiment, he rubs pus from a dairymaid’s cowpox postule into scratches on the arm of his gardener’s 8-year-old son. Then he exposes the boy to smallpox six weeks later (which he does not develop). The process becomes known as vaccination from the Latin vacca for cow. Britain makes compulsory vaccination with cowpox in 1853. Jenner is sometimes called the founding father of immunology. 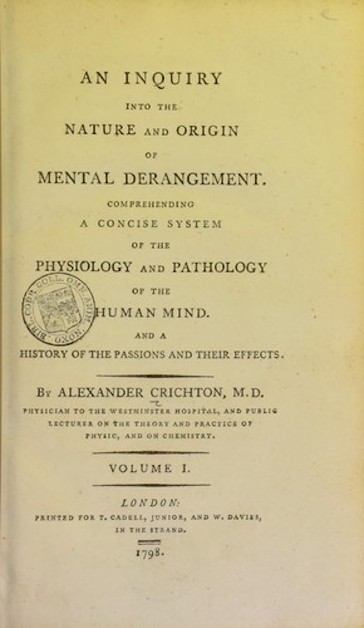 Alexander Crichton provides the first known description of disorders of attention in his three-volume medical textbook. 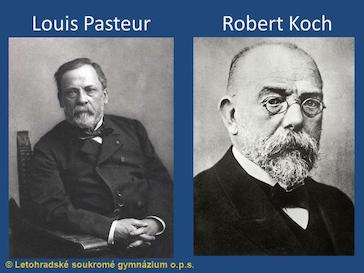 Louis Pasteur and Robert Koch establish the germ theory of disease. According to germ theory, a specific disease is caused by a specific organism.

Before this discovery, most doctors believe diseases are caused by spontaneous generation. In fact, doctors would perform autopsies on people who died of infectious diseases—and then care for living patients without washing their hands. They did not know that they were, therefore, transmitting the disease. 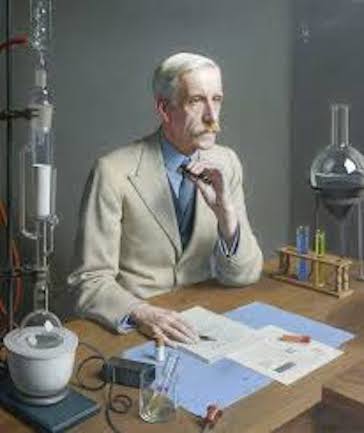 Sir Frederick Gowland Hopkins suggests the existence of vitamins and concludes they are essential to health. Receives the 1929 Nobel Prize for Physiology or Medicine. 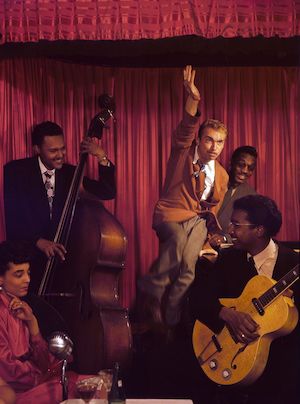 Harry “The Hipster” Gibson wrote and performed Who Put the Benzedrine in Mrs. Murphy’s Ovaltine in 1944.  (See more about him below.

To learn more:  Did Mrs. Murphy Abuse Benzedrine? Or Did She Have ADHD?

James Watson and Francis Crick at Cambridge University describe the structure of the DNA molecule. Maurice Wilkins and Rosalind Franklin at King’s College in London are also studying DNA. (Wilkins, in fact, shares Franklin’s data with Watson and Crick without her knowledge.) 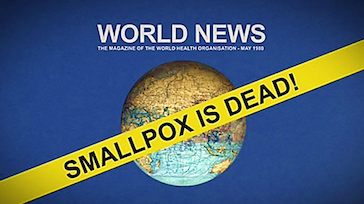 Almost two centuries after Crichton wrote about ADHD, Zametkin and colleagues conducted the first neuroimaging study of adults with ADHD (Cerebral glucose metabolism in adults with hyperactivity of childhood onset).

This ADHD medical history milestone made it to the front cover of Time magazine.

The research team used positron emission tomography (PET) to study the cerebral glucose metabolism of 25 adults who were currently hyperactive and had been so since childhood,  They compared them to 50 normal control adults and found that the hyperactive adults manifested reduced metabolism globally and particularly in the premotor cortex and super prefrontal cortex. These are areas previously shown to be instrumental in the control of attention and motor activity. (From The ADHD Report, February 2009)

The first version of this post appeared in 2009, the only article online about this topic at the time. Updated September 2022.