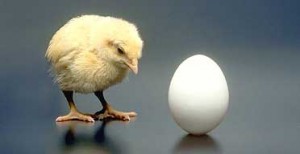 Do you ever read news stories that raise giant red flags of ADHD—yet never mention it by name? I  just read two such stories. They flooded my mind with remembrances of the thousands of posts I’ve read over the years, from partners of adults with ADHD. Posts that touched directly on the topics.

The first story reported a study indicating that children in day care are more impulsive and bigger risk takers than children who did not go to daycare or who spent less time in day care.

The second story explored the effect of  electronic  devices on the human brain, including addiction.

First, let’s remember a common error made with  psychological (and sometimes even medical) research: confusing association with causation.

That is,  researchers claim their studies shows cause-and-effect (“causation”). When, in fact, their research shows only a relationship between two variables (“association”).  Sometimes, researchers do not explicitly make this claim. They merely suggest “risk factors” (a risk factor for Alzheimer’s is advanced age).  But reporters—and sometimes the press office of the university associated with the research—overstate the connection between cause and effect.

For example,  we’ve all read studies showing that couples who argue more about money are more likely to divorce.

Does that mean that if a couple simply stops arguing about money, that all will be bliss?  Does it mean that it’s the argument itself or the “different attitudes” towards money that cause the divorce and if that’s resolved, all will be well?  Maybe, in some cases.

But what if one or both of the people in the couple has Adult ADHD,  and impulsive spending or failing to pay bills is but one of a constellation of  ADHD symptoms?   That’s just one example to explain the common association-causation confusion, especially when it comes to ADHD.

Now, on to the recent stories.

The latest findings of the federally funded Early Child Care Research Network are certain to be no exception. At age 15, according to a study being published Friday in the journal Child Development, those who spent long hours in day care as preschoolers are more impulsive and more prone to take risks than are teens whose toddler years were spent largely at home.

The researcher points to a “contagion” effect:

In classrooms and peer groups populated by kids who may be just a little more impulsive or risk-taking, “these small effects end up being spread and bounce off each other,” said Belsky in an interview. “The dynamic becomes, ‘I dare you to take a risk, you dare me to take a risk.’

That’s an interesting phenomenon. I don’t doubt for a minute that it’s possible.

Nonetheless, how do the researchers prove that longer hours in daycare lead to children’s increased impulsiveness and risk-taking?  I see no evidence in this research.  Moreover, did they  consider the possibility that parents who are impulsive risk-takers might—for a multitude of reasons—be more prone to leaving their children (and genetic recipients) in daycare and for longer hours?

I’ve witnessed for more than a decade the myriad circumstances wherein unrecognized ADHD in one or both parents meant the child spent time in daycare. So I have to wonder why researchers apparently didn’t factor in the particulars of parents who place a child in daycare.

Please understand: I’m not debating the relative merits of daycare or the right of working parents to have daycare as a worthwhile option. Nor am I arguing that people with unrecognized ADHD are bad parents.  I’m simply pointing out that daycare might  not be causing children to be risk-taking and impulsive. Instead, more risk-taking and impulsive children might attend daycare in the first place.

ADHD as Search for Stimulation Syndrome?

The next story, “Hooked on Gadgets, and Paying a Mental Price,” continued for five pages. Nary a mention of the added vulnerability Adult ADHD brings to this situation. Excerpt:

When one of the most important e-mail messages of his life landed in his in-box a few years ago, Kord Campbell overlooked it. Not just for a day or two, but 12 days. He finally saw it while sifting through old messages: a big company wanted to buy his Internet start-up.

The message had slipped by him amid an electronic flood: two computer screens alive with e-mail, instant messages, online chats, a Web browser and the computer code he was writing. …

Scientists say juggling e-mail, phone calls and other incoming information can change how people think and behave. They say our ability to focus is being undermined by bursts of information.

These play to a primitive impulse to respond to immediate opportunities and threats. The stimulation provokes excitement — a dopamine squirt — that researchers say can be addictive. In its absence, people feel bored.

The resulting distractions can have deadly consequences, as when cellphone-wielding drivers and train engineers cause wrecks. And for millions of people like Mr. Campbell, these urges can inflict nicks and cuts on creativity and deep thought, interrupting work and family life.

So, see, there is a mention of the “dopamine squirt.” Yet, you’ll find no mention that people with ADHD are more prone to needing—and seeking—that dopamine squirt. Despite ADHD being all about the dopamine (not to mention a few other neurotransmitters.)

Few would argue that flooding our brains with dopamine, as many of us are doing these days, takes no toll, whether or not we have ADHD.  But to leave ADHD completely out of the equation seems a bit disingenuous to me,  not to mention misleading.

As for the family profiled, the Campbells, I can’t help but wonder if Mrs. Campbell is in a bit of “denial”:

Their 16-year-old son, Connor, tall and polite like his father, recently received his first C’s, which is family blames on distraction from his gadgets. Their 8-year-old daughter, Lily, like her mother, playfully tells her father that he favors technology over family.

“I would love for him to totally unplug, to be totally engaged,” says Mrs. Campbell, who adds that he becomes “crotchety until he gets his fix.” But she would not try to force a change.

“He loves it. Technology is part of the fabric of who he is,” she says. “If I hated technology, I’d be hating him, and a part of who my son is, too.”

We can’t presume to know if an ADHD screening might be a good idea for Mr. Campbell. But I have heard many, many partners of adults with ADHD share Mrs. Campbell’s mindset:  that it’s impossible to separate the person from their electronic obsessions, and to do so is unloving.

Here’s the thing, though: The partners of adults with ADHD typically stop expressing that mindset when their family started falling apart from too much impulsivity, addiction, and risk-taking.  Sadly for some, by then it’s too late.

I’d love to learn your personal perspectives on these two stories.

Please leave a comment below.  It’s easy. No annoying codes to enter.

9 thoughts on “ADHD: Cause or Result? Two News Stories”