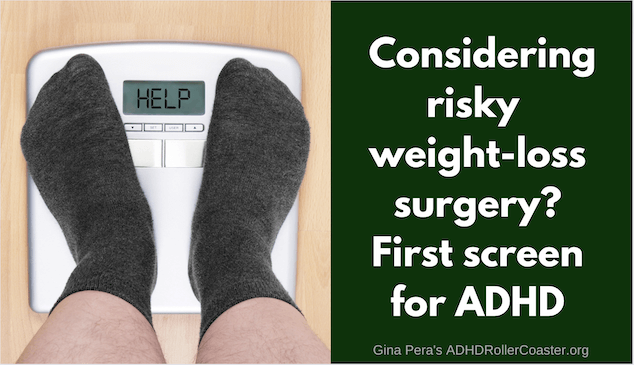 For years, ADHD experts recognized the link between untreated ADHD and obesity. As for weight-control experts and gastric-bypass surgeons? Maybe they missed the memo. Or, is it territorial protection?

Let’s be charitable. Consider it one more casualty of our highly specialized medical system. One that too often overlooks undiagnosed ADHD’s contributions to many physical issues.

At the end of this post, I’ll link to another post sharing the results of a large study finding ADHD as a risk factor in most chronic conditions, including these: 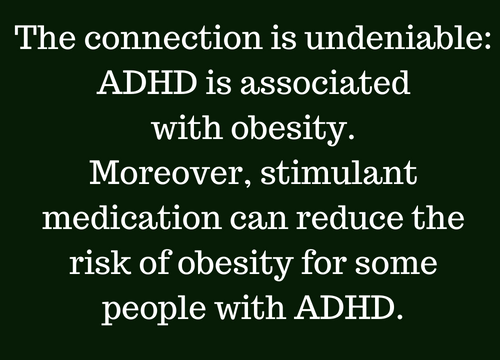 In short, research increasingly points to a strong correlation between ADHD and obesity.

How strong a correlation?  Someone with ADHD is four times more likely to become obese than is someone without ADHD.  Brain chemistry, poor impulse control, difficulty organizing shopping and preparing meals, and erratic sleeping habits all conspire to encourage unhealthy eating — and to make weight loss feel or be impossible.

The implications are clear:  Treating ADHD early means many people could avoid these  disabling illnesses and conditions. Even treating ADHD later, after these conditions have set in, could still help reverse or at least slow disease progression while also treating ADHD symptoms, perhaps for the first time.

Anyone considering drastic weight-loss or sleep-apnea surgeries should first consider screening for ADHD. Don’t expect that your weight-loss specialist or surgeon or sleep specialist will know how to recognize ADHD.

Commonly, we see disordered eating attributed largely to  psychological issues — such as trauma, anxiety, unresolved childhood issues, willfulness, attention-getting. No matter how many of those torturous A&E shows I’ve watched, ADHD hasn’t even been on the radar.

Below you’ll find four categories of information on this topic:

Toronto-based psychologist John Fleming, Ph.D  is among the first researchers to link ADHD and weight gain.

Here are the summaries for their two early studies:

Now let’s examine the details for each study. 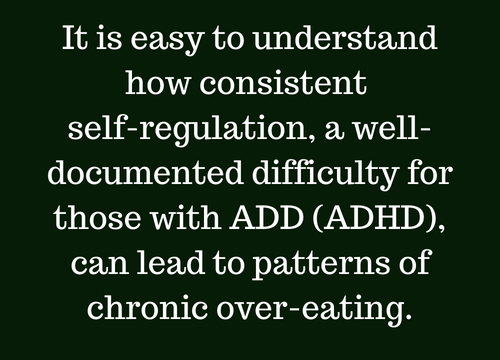 Objective: Past and current symptoms of Attention Deficit Hyperactivity Disorder (ADHD) were assessed in a clinical sample of severely obese females.

Method: Core symptoms of ADHD were examined in 75 consecutive, severely obese (BMI > or = 35) women referred to a medical specialist for the non-surgical treatment of obesity.

Overall, 26.7% of the sample reported significant symptoms of ADHD in both childhood and adulthood.

The first study (2009) identified subjects who had a history of difficulty with weight-loss and who likely had ADHD. The hypothesis? Untreated ADHD was proving an impediment to weight loss.

(For reference, refractory means “hard or impossible to manage” and comorbid means co-existing.)

Design: Longitudinal clinical intervention study of the effects of ADHD medication on weight change over 466 days.

Comorbid [or, co-existing] conditions were found to be highly prevalent :

ADHD is a highly prevalent condition in the severely obese population. Treatment of ADHD is associated with significant long-term weight loss in individuals with a lengthy history of weight loss failure. 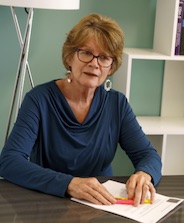 I first read about this topic in 2002, in a book chapter called “Disordered Eating and ADHD.” Fleming and Levy contributed the chapters to the groundbreaking Gender Issues and ADHD: Research, Diagnosis, and Treatment, edited by Patricia Quinn, M.D. and Kathleen Nadeau, Ph.D. 2002.

Psychologist Kathleen Nadeau and developmental pediatrician Patricia Quinn teamed up originally to address the long-overlooked needs of women and girls with ADHD. They founded The National Center for Girls and Women with ADHD [update: closed in 2013].

In the process —through their many books, lectures, and other efforts — this pioneering pair expanded our knowledge in all aspects of ADHD. Across genders and the lifespan. [See a recent post about their new book, Understanding Girls with ADHD: A Must-Read about Girls with ADHD.]

Therefore, it’s unsurprising that Quinn and Nadeau stood on the vanguard of creating awareness on this ADHD-obesity issue.

Consider this excerpt from an early article written by Nadeau, entitled Diet and Weight Management Strategies for Adults with ADD (ADHD) [no longer available online]

The ADHD/disordered-eating connection is not difficult to understand.

Healthy dietary regulation requires organization and planning— two areas of cognitive functioning that are typically difficult for those with ADHD.

Many individuals with (ADHD) report that they skip meals because they were busy and distracted; these same individuals often report that later their hunger becomes so intense that they swing in the opposite direction, overeating well beyond the point of reasonable intake because they don’t know when to stop until they feel “stuffed.”

Individuals eat for many reasons besides hunger – including boredom, self-stimulation, anger, sadness, reward, simple food availability, and stress relief. It is easy to understand how consistent self-regulation, which is a well-documented difficulty for those with ADD (ADHD), can lead to patterns of chronic over-eating. 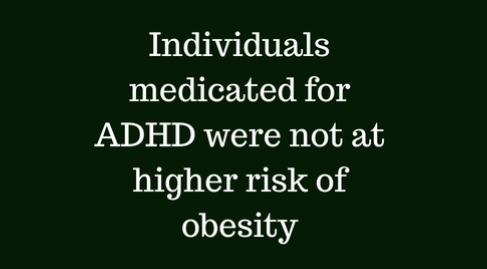 More recently, the literature is mounting on the relationship between ADHD and eating behaviors.

Consider three more recent papers, starting with the most recent.

2021:  Half of the children with ADHD and obesity studied reach normal weight with stimulants

Lead researcher Jovanna Dahlgren, MD, is a pediatrics professor at Sweden’s University of Gothenberg. Her research covers a range of topics; she is not an ADHD specialist. Perhaps her cross-disciplinary knowledge aided her ability to make the connections here.

Aim: Treatment of childhood obesity is often insufficient and may be aggravated by high co-occurrence of attention-deficit/hyperactivity disorder (ADHD). We aimed to investigate whether children with overweight or obesity normalised in weight when receiving stimulant treatment for ADHD.

Methods: Growth data of 118 children were obtained from medical records at outpatient paediatric and children’s psychiatric services in the Gothenburg area, Sweden. The children were diagnosed with ADHD and were between 6 and 17 years at the start of stimulant treatment. The pre-treatment data act as an internal control where every child is their own control.

Results: At the start of treatment, 74 children had normal weight and 44 had either overweight or obesity. During the year with stimulants, the mean (SD) body mass index (BMI) in standard deviation score (SDS) decreased significantly: -0.72 (0.66) compared with 0.17 (0.43) during the year before treatment (p < 0.01). After one year with treatment, 43% of those with overweight or obesity had reached normal weight.

Conclusions: Stimulant treatment for ADHD yields significant weight loss. In children with overweight or obesity and ADHD, this is an important finding showing additional benefit in terms of weight management.

Here are some highlights from Attention-Deficit Disorder and Obesity: Update 2016, by Samuele Cortese and Luca Tessari.

2015: Association between ADHD and Obesity: A Systematic Review and Meta-Analysis

Also from a team headed by  Samuele Cortese:  Association between ADHD and Obesity: A Systematic Review and Meta-Analysis. 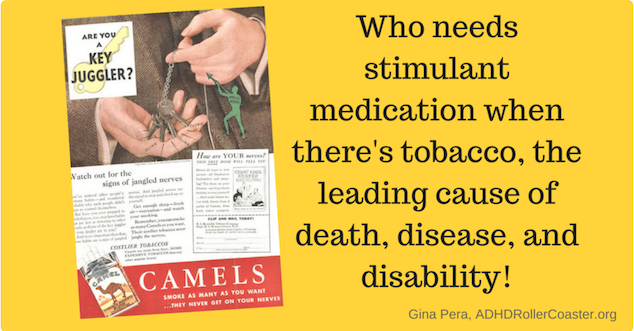 Remember a few decades ago when millions more Americans smoked cigarettes? Remember when smokers complained of gaining weight every time they tried to quit?  Nicotine is a fairly effective (if highly problematic) stimulant. I wrote about this topic here: ADHD & Nicotine: Historical Ads.

Do you suspect that ADHD has affected your or your loved one’s ability to regulate eating?

And remember: Some people with ADHD might be chronically underweight for reasons similar to those who are overweight. Consider similar challenges with lack of planning, not paying attention to internal phenomenon, and simply finding eating boring. A chore to get through.

I’ve known several late-diagnosis adults with ADHD—rail-thin all their lives—who gained weight once they started stimulant medication.  What? We only hear about stimulants resulting in weight loss, not gain.   They gained weight because, among, they could finally pay attention to internal phenomenon and they could taste more flavors. Food became more interesting, instead of just a chewing exercise.

23 thoughts on “ADHD and Obesity: Reviewing the Research”