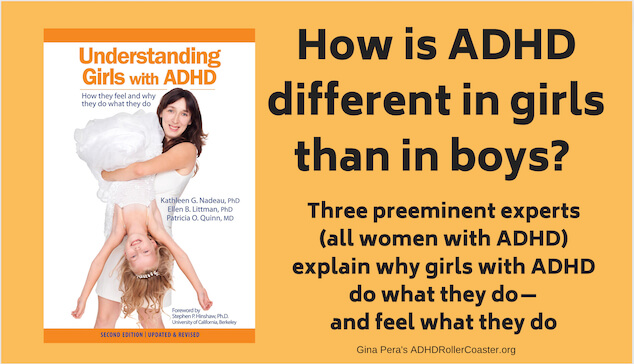 Do I recommend the new revision of Understanding Girls with ADHD: How They Feel and Why They Do What They Do?

Consider the opening  lines of my review on Amazon.com. After, you’ll find a personal essay from co-author Kathleen Nadeau, PhD. This longtime prominent expert on ADHD shares some of the research findings that inform the book.

Buy this book. Read it. Read it again. Buy another copy for anyone else who could benefit from a more in-depth understanding of the girl in your life who has ADHD (maybe the girl that was you, maybe your daughter or grand-daughter).

My female friends who’ve read this book rave about it, too, typically saying, “If only my parents had this book when I was growing up.”

I had asked the book’s co-authors if I might share an excerpt of this must-read book. Dr. Nadeau responded with something even better: a personal essay.

Drs. Nadeau and Quinn rank in my Top Five of ADHD experts. I greatly respect both of these professionals not only for their tireless efforts in placing “ADHD in Females” on the map but also for being pioneering and prolific authors on ADHD in general. Ellen Littman, PhD is also well-known as a longtime clinical ADHD expert, based in New York State.

I was thrilled when Gina Pera, a pioneer in helping all of us to understand couples affected by ADHD, invited me to submit a posting to her wonderful ADHD Roller Coaster blog.

As an ADHD specialist, my mission has been to write about those with ADHD whose struggles go ignored.

I first focused on adult ADHD in the 80’s and early 90’s, when adult ADHD went largely unrecognized. Then, a few years later, my colleagues Ellen Littman, Ph.D., and Patricia Quinn, MD, and I came together to write Understanding Girls with ADHD.

Now, in 2015, we’ve written a revised and updated edition of Understanding Girls with ADHD. I’m glad to say that there is much more research to report.

My daughter received her ADHD diagnosis n 1980. She was distractible, restless, and unfocused in school, but made good enough grades to be denied any accommodations. There was no recognition of “gifted ADHD” as there was of “gifted LD.”

Now, in 2015, I have a granddaughter just diagnosed with ADHD. She’s a lovely, bright, creative 10-year-old who has been denied accommodations on a qualifying exam for a magnet program. Why?  Because like her mother, she is doing very well in elementary school thanks to her above-average IQ. There is no recognition that her ADHD will likely prevent her from acceptance into the magnet program – the very type of program that she would thrive in – because she won’t receive accommodations on the entrance exam.

So, just at the time of the publication of our second edition of Understanding Girls with ADHD, it’s clear that there is more work to be done. Due to my granddaughter’s issues, I continue to have a very personal stake in helping educators and other professionals to better understand girls with ADHD.

A Review Of Recent Research On Girls

How are girls different? Let’s take a look at what research over the past decade tells us.

—Have differences in brain structure compared to boys

—May find symptoms worsen at puberty, just at the time when boys’ symptoms of hyperactivity are improving

—May be more at risk for serious mental health problems in early adulthood than are boys:

—Girls with ADHD tend to be overlooked if:

Even girls showing ADHD symptoms similar to boys, are still often overlooked by a teacher; studies show that:

Bottom line About Girls with ADHD

Research shows that girls often continue to be overlooked due to less obvious symptoms in the classroom. Yet, they are actually at greater risk than boys if their ADHD goes untreated as they pass through their teen years into adulthood. It’s up to all of us to educate those professionals that can make such a difference to our daughters with ADHD.

Link to the Book and First-Person Essay

18 thoughts on “A Must-Read About Girls With ADHD”