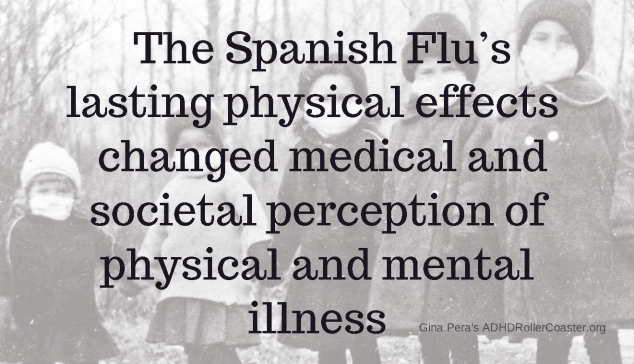 In the wake of the 1918 Flu Pandemic, physician Charles Bradley made an accidental discovery in 1935. It was this: A stimulant medication can mitigate what we now view as ADHD symptoms. But that wasn’t his intention. Instead, he’d sought to alleviate pain in pediatric survivors of  the Spanish Flu.

Only a few years earlier, flu survivors’ lasting maladies changed medical and societal perception of physical and mental illness. It eventually led to other major medical discoveries. This four-part post series details a few of them.

Will we see similar lasting effects from COVID-19 influenza? Medical experts say we already are.

My intention in presenting key points on this topic is not to create more COVID-related anxiety.  Rather, my goals are: 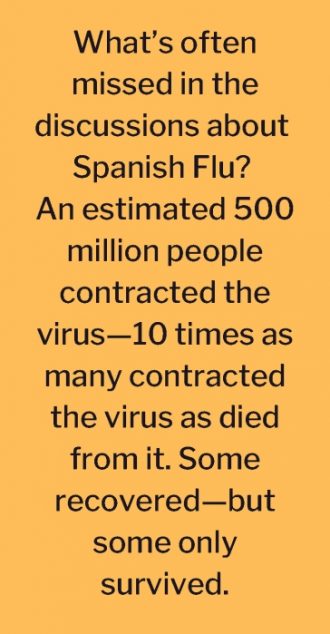 Highlights of this Four-Part Series

This is an unusually long—but I hope, interesting—look at these topics.

A pandemic, as everyone knows by now, describes a worldwide epidemic. The Spanish Flu, or 1918 Flu Pandemic, remains the most well-known. (We no longer call it the Spanish Flu because it did not start in Spain. It had nothing to do with  Spain. It’s a long story, involving WWII-era news blackouts everywhere but Spain.) It killed 50 million people worldwide—ten times more than died in WWI.

It’s considered history’s most deadly pandemic. It was only one, however, in a series of pandemics that preceded it over decades. They came in waves and in various forms.

One in the late 1800s took both my newly immigrated paternal great-grandparents, orphaning my grandmother (pictured), age 9.  She grew up in St. Peter’s Orphanage in Memphis. As a young teen, she worked as a domestic servant. Fortunately, she was smart and a fantastic cook, with a nice personality. She married well.  Many orphans were not so lucky.

Technically, the majority recovered—though to what extent we do not know. It might be more accurate to say  that they survived. Medical science proved ill-prepared to investigate fully.  Lingering effects might have been attributed to other causes.

One thing that we know for sure: Survivors in significant number were left with new and crippling illnesses. Tragically, most  had no treatment.

With time and scientific inquiry, these illnesses led to important medical breakthroughs. In fact, one discovery caused medical and political authorities to re-examine our views of criminality.

In the subsequent three posts, I’ll distill only three highlights that stood out for me in the context of ADHD and other neurobiological conditions.

Children Develop the Disease of Criminals

1920-1927: Coming on the heels of the 1918 Flu—and some say, related to it—the pandemic of Encephalitis Lethargica created devastating brain impairments.

Reportedly, the majority of children who contracted EL manifested neurological disturbances after recovering from the acute stages of the disease. Some even displayed psychopathic tendencies. For most, this lasted for the rest of their lives.

The 1918 Pandemic, Penicillin, and Stimulant Medications

—1928: A a dust mote randomly lands in an influenza researcher’s petri dish. Penicillin is discovered. That discovery was ignored for 20 years.

—1935: An accidental discovery leads to medication treatment for what we now recognize as ADHD symptoms. It happened in the first psychiatric hospital for children. Grieving parents of a child with severe after-effects from EL created that hospital.

That discovery was ignored for 85 years, despite having no other treatments for these children.

—1969: Famed neurologist Oliver Sacks played a role in “awakening” adult EL survivors who had for years lingered in a “ghost-like” state. He did so by targeting the neurochemical we often talk about in the context of ADHD: dopamine.

Note that pediatric and adult EL survivors manifested different symptoms. Some attribute this to children’s brains not yet being fully developed.

But First: What is Encephalitis Lethargica (EL)?

As mentioned, all three of these highlighted topics involve a condition called Encephalitis Lethargica (EL). Before continuing, let’s define it.

The term encephalitis refers to an inflammation of the brain. There are several causes. The most common, however, is a viral infection—that is, infection from a virus.

Can we make a direct connection between having 1918 Flu and developing this disease with its typically lingering impairments? Several medical theories posit yes. None has been proven conclusively. One theory: The debilitating effects of the influenza left survivors vulnerable to a type of encephalitis transmitted virally.

Back when influenza pandemics from the late 1800s to the early 1900s devastated the world, however, we knew very little about these complex factors. We did not understand that flu survivors  could become more vulnerable to developing a new condition. Therefore, the two illnesses were connected.

These pandemics survivors suffered profound and novel maladies that medical science did not yet understand and could not treat. That included “behavioral” disorders such as that found with EL. The malady became so closely associated in time with the 1918 Flu  that some researchers link the two in cause.

Will we see novel medical phenomenon in the wake of COVID? We already are, as well as some old phenomenon.

In fact, medical historians have been sounding the alarm since at least last summer (2020). We should be on the watch for permanent health changes among COVID survivors. That includes in the brain and nervous system as well as cardiovascular system.

How is this? The brain is an extremely delicate and vulnerable organ. Even as our immune response might keep our bodies alive, it can devastate our brain. Current research points to four likely ways in which this influenza, as with the 1918 Flu, can harm the brain:

On that last point, Johns Hopkins researchers uncovered at least long-range impact of the 1918 Flu pandemic. Children whose mothers had the flu during those pregnancies experienced increased incidence of heart disease. To read more: How Does Coronavirus Affect the Brain?

University of Southern California at Davis gerontology researcher Caleb Finch found that “even mild sickness from flu could affect fetal development with longer consequences.” To read more: Lasting Legacy of the H1N1 Flu of 1918

Also: The Deadliest Flu: The Complete Story of the Discovery and Reconstruction of the 1918 Pandemic virus

Why did Dr. Bradley even consider Benzedrine when seeking to alleviate headaches in children after a painful radiologic diagnostic procedure?  Read more about the historical use of Benzedrine:  Did Mrs. Murphy Abuse Benzedrine—Or Did She Have ADHD?

This paper examines the evidence for “long COVID” in children, similar to what researchers are seeing in adults.

More recently, an Australian study reported post-acute COVID-19 symptoms in 8% of 151 children followed more than 3 months after having been tested positive for SARS-CoV-2 [20].

An Italian study also reported that more than 50% of a cohort of 129 children had residual symptoms at follow-up 4 months after the initial diagnosis [21].