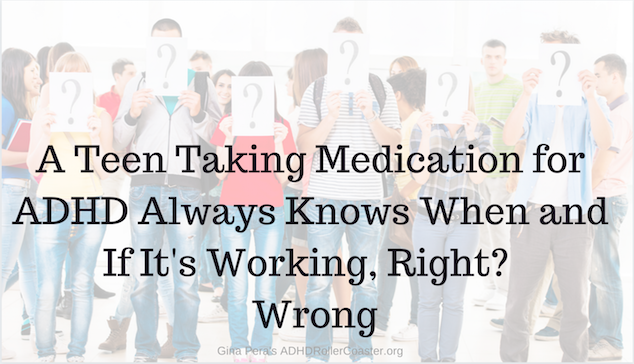 Can teens with ADHD tell when they are on medication—compared to placebo? Researchers sought to answer that question in the study examined below. The findings might shock you.

In this post, I’ll set the scene for this topic in several ways and then share psychologist David Rabiner’s interpretations of this study. But first, two points:

“How Could You Tell I Didn’t Take My Medication?!”

Many adults with ADHD don’t “feel” when their stimulant medication is in effect. But their loved ones do.  The ADHD partner might decide to skip a dose, rationalizing, “It’s Saturday! I don’t need to focus!”

Then they are surprised (and maybe angered) when their partner or children ask, “Did you take your medication today”?  How could they tell?

Yes, that is definitely a tricky question—”Did you take your medication today?” It requires sensitivity and tact. That is made all the easier when couples wisely approach medication treatment as a team. (This is a recommended strategy in our clinical guide:  Adult ADHD-Focused Couple Therapy: Clinical Interventions).

Some adults decide that the medication is not working—and stop taking it. Yet, they never connect the heightened challenges that follow as being connected to stopping medication.  This is a major problem with the status of prescribing, and it’s one I tackle head-on in ADHD Success Training (estimated early 2021).

Another common mistake: Expecting to feel the stimulant medication taking effect. In fact, that’s one reason I warn about trying Adderall first when starting medication for ADHD. Unlike as with most other stimulants, many people feel Adderall working. Viscerally. Physically. Maybe it’s a tingly or buzzy feeling. Maybe it’s feeling super-charged.

That means some Adderall users assume that subsequent stimulant choices aren’t working unless they can feel it, physically. They might even keep ratcheting up the Adderall dosage in order to recapture that feeling. I wrote about the potential problems in my blog’s most popular post:  The Tragic Truth of Prescription Adderall, or “Madderall”.

When it comes to teens, I saw this same question (“Do teens know when a medication is having an effect?”) play out in a striking way years ago.

I’d organized a panel of teens with ADHD to speak at our monthly public meeting in Palo Alto. The four boys and one girl sat before a packed room to talk about their experiences of having ADHD and answer questions. Four teens had been diagnosed early and taking medication from a young age. One, a high-school sophomore, was newly diagnosed and taking medication only a few months.

The four teens who’d been in treatment since childhood formed a block consensus: They would stop medication when they left home for college. After all, medication was never their choice; it was their parents’ choice. They expressed skepticism that they actually have this thing called ADHD.

That impressed upon me the need for better education, for parents and children, in actively making an effort to notice the positive changes medication might bring. It might be worth a strategic  “drug holiday” during vacation or summers so they can compare. Dr. Rabiner offers suggestions below.

At any rate, the fifth teen sat patiently at one end while they explained their positions. When it was his turn, he expressed his anger and outrage that his ADHD had gone undetected for so long. He thinks he would have been so grateful to have known earlier, as these other panelists had. Because he was good at sports, he’d been relegated to “dumb jock” status. When finally he learned about ADHD, he demanded an evaluation. With medication, he was stunned at what a difference it made. He was not a dumb jock. He was an athlete who was also smart.

Ben Helps Me Talk Back to Esquire

When I was asked to write a opinion piece countering Esquire magazine’s egregious Drugging the American Boy article, I closed with an excerpt of the note this boy, Ben, had written to me when he was diagnosed. That’s how I met him. Here is the piece:  How Esquire Got ADHD Wrong. 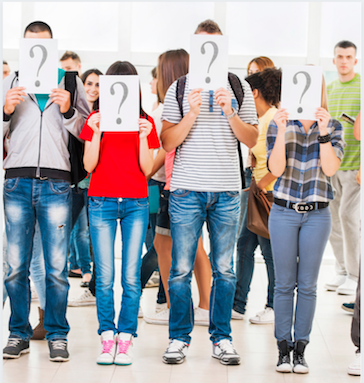 Now for the Study!

Duke University professor David Rabiner, PhD has long performed the excellent service of parsing the research around ADHD in his free newsletter, Attention Research Update. You can subscribe there at the link.

Here is the abstract from the paper Attributions and Perception of Methylphenidate Effects in Adolescents With ADHD:

Although a number of studies demonstrate that children with ADHD do not attribute their behavior to taking medication, it remains unstudied whether adolescents, who have a longer history of taking medication for ADHD, show performance attributions to medication.

A sample of 46 adolescents completed daily attributions for success or failure as a part of their participation in a summer treatment program with a double-blind, placebo-controlled assessment of methylphenidate.

Results: Results demonstrated that adolescents with ADHD did not reliably discern active medication from placebo, rarely attributed their performance to the pill, and showed no differences in attributional style as a function of medication status.

These data indicate that adolescents with ADHD may possess inaccurate beliefs about the effect of stimulant medication on their behavior.

Multiple studies have established that stimulant medication treatment is effective for adolescents with ADHD, especially in reducing core ADHD symptoms. However, adolescents frequently stop taking medication, and by age 18, less than 10% continue to take it. This is problematic given that symptoms often persist into young adulthood and continued treatment can be essential.

One reason frequently expressed by teens for stopping medication is their belief that it is not helpful. However, teens may not be accurate judges of whether medication is helping them and may not even be able to detect when they are receiving medication. The inability to distinguish active medication from placebo treatment has been demonstrated in children, but not previously examined for teens.

How The Study Was Conducted

In this study, 46 youth ages 12 to 17 participated in a summer treatment program that combined medication treatment, behavior therapy, and both academic and social skills training. For the medication component, each adolescent underwent a placebo-controlled medication assessment in which he/she was tested on 3 different doses of methylphenidate as well as a placebo. Medication or placebo was administered 3 times per day.

They were also asked to rate how much their behavior and academic performance during the day had been influenced by a variety of factors including: their ability, effort level, whether they had been treatment fairly, medication they had taken, and having ADHD. Counselors and teachers rated participants’ behavior and academic success during the day.

Did medication help? – The answer here was a clear yes. On average, adolescents’ behavior and academic work was significantly better on active medication days than on placebo days.

Could adolescents tell when they were on medication vs. placebo? – No, they could not. In fact, their ability to correctly identify medication days vs. placebo days was not better than chance, i.e., guessing. This replicates a finding previously reported for children.

Furthermore, even though their behavior/academics was significantly better during medication days, adolescents rarely reported that medication played an important role in their success.

Although medication was objectively helpful, teen participants rarely saw it as a key factor in their success. And, their ability to correctly distinguish between active medication days and placebo was no better than chance.

While attributing their success to effort and ability is a positive attribution, not recognizing the benefits provided by medication may contribute to why so many teens refuse to take it. After all, if you don’t believe medication is helping, why take it?

Given that teens could not reliably tell when they had taken medication or placebo, it is not surprising that they would be similarly unaware of benefits that medication provided. This is important to keep in mind when a teen objects to continuing medication because they don’t believe it is helping. Although they may be right, one should not assume their report is accurate.

There are several issues to highlight.

First, the sample was relatively small and teens were given regular methylphenidate rather than a longer-acting medication. Caution is thus required when interpreting these findings and there would be value in replicating the study with a larger sample and different types of medication.

Next, adolescents, on average, may have trouble detecting when they have received medication or how it affects them, but this does not mean individual teens are unable to do this. Thus, one should not use these results to discount the reports of individual teens. Instead, the findings provide an important context for interpreting individual reports.

Teens often refuse medication because they don’t believe it is helping. Therefore, an important clinical implication is the need to engage teens in a discussion.

These are conversations parents and health professionals can have with teens and a procedure to gather data on medication effectiveness can also be considered. For example, one could try alternating days on and off medication to see if it makes a difference in getting school work done.

Another option would be to have the teen complete a computerized attention test on and off medication to see whether their performance differs (one would need to work with a health care provider on this).

Neither approach is a “perfect” procedure, but the goal is not perfection. Instead, it is to engage the teen as a collaborative partner in an important discussion about their health and treatment and to gather information relevant to this decision.

In any such discussion, involving the teen’s healthcare professional is essential.

6 thoughts on “Do Teens With ADHD Notice Medication’s Effect?”