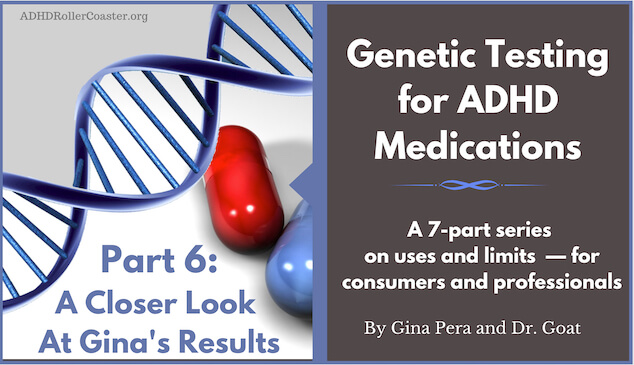 This  7-part series began with a single post in mind. Hey, we said, let’s get gene-tested for ADHD medications-response! We can share the results with ADHD Roller Coaster readers! That’s right: Nerds!

Who is we? Gina Pera, and my husband, Dr. Goat, a molecular biologist and geneticist diagnosed with ADHD at age 37.

How many average folks know what is a gene variant, an extensive metabolizer, or a receptor? How many can describe the difference between an active and an inactive medication?

The answer is, “Not many.” Is it important?  Well, it can be, if you’re having trouble identifying an ADHD medication that helps mitigate your ADHD symptoms. I also think it’s interesting—and it underscores the complexity of ADHD and the medications used to treat it.

To perform a public service, we provide you with a foundation for understanding the these tests’ potential benefits and limitations. There won’t be a test. You might just find it interesting to skim. But we worked to make it understandable to the average person.

Dr. Goat and I appreciate the enthusiastic response thus far.  So far, one reader reports reading to the end. Kudos to her. She now knows more than 95% of physicians ordering this  test!  Just kidding. (Or am I?)

In our previous post, Dr. Goat shared his reactions to receiving the test results—his and Gina’s. We did the testing via a now-defunct company called Harmonyx. (There are other testing options, including some covered by insurance.)

By the way, Gina took the test solely out of intellectual curiosity. She does not have ADHD.

Now that we understand a little more about how these tests work, we dig deeper into  Gina’s results.  (Already shared in in Part 2: Genetic Testing for Choosing ADHD Medications.) Next week, we’ll revisit Dr. Goat’s results.

The report shows no obvious genetic problems with Gina’s ability to utilize all the medications in the green column (“Try these first”).   Does that mean she needs these medications?  No. Or that she will derive a benefit from them? No, it absolutely does not. This test is for people already diagnosed with ADHD. The test itself does not make the diagnosis.

Here’s the hard-to-see “fine print” under the first column: “No genetic reason to suspect a lack of efficacy. These medications may be associated with a gene-dose effect. Please see the guidance notes below.” 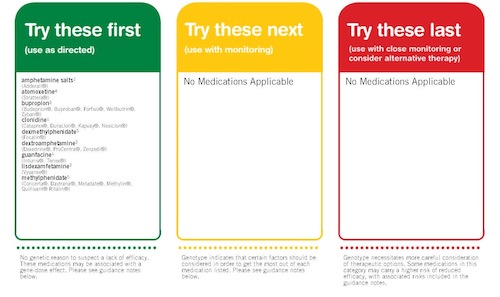 Beyond the side effects she might get from taking a medication for a condition she does not have, do Gina’s selected genes tell us about how she might react to the listed medications? The test results offer a “closer look” (see figure below), one that explains: 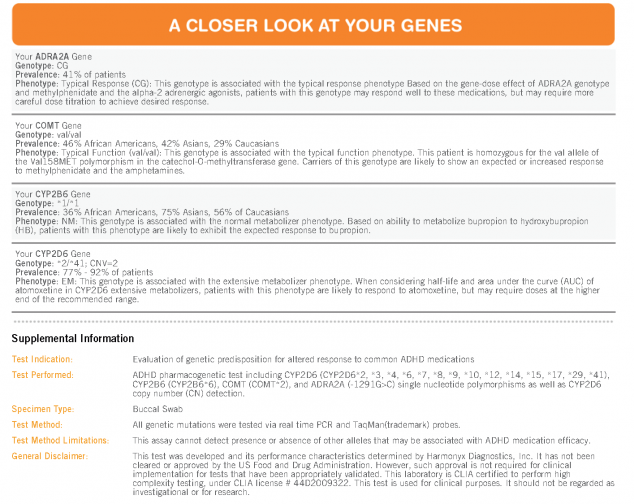 Let’s look at one of these genes for Gina (if we make the image bigger/more legible, Google will penalize this post, so we’ll state it here):

Phenotype: Typical Response (CG): This genotype is associated with the typical response phenotype. Based on the gene-dose effect of ADRA2A genotype and methylphenidate and the alpha-2 adrenergic agonists, patients with this genotype may respond well to these medications, but may require more careful dose titration to achieve desired response.

This would be great news—if Gina actually had ADHD.

A large fraction of the population (41%) has this form of the ADRA2A gene. It is associated with a conventional response to methylphenidate (e.g., Ritalin, Concerta). That is, a therapeutic benefit with minimal side effects is expected, at least as far as this gene is considered. Remember, there are lots of factors—well beyond this one genetic variant of ADRA2A—that influence how effective a drug is for a given patient.

The statement about “careful dose titration” is standard good advice for any drug, as we explained in a previous post.

Let’s look at another of Gina’s gene, one we explored in post 4 in the series:

Aha! Not quite perfect! Gina has reduced function in one allele. (I know this because I’m a geneticist, not because it’s stated in the report).

Still, in combination with the “normal” allele, it means that Gina is effective at metabolizing drugs. In other words, she is an “extensive metabolizer”.

As we explained in post 4,  “extensive” is  the common class of metabolizer. It represents the type of people for which most drugs are designed: “normal” or “extensive” metabolizers.  For a refresher, see diagram below.

That’s good.  The “regular” job of this gene is to remove compounds from the blood in order to keep it clean. Given this combination, the dosage of atomoxetine (Strattera) might even need to be increased somewhat.  That’s because she is so good at removing it from her blood stream.

If you’re wondering about the mysterious “CNV”, it stands for Copy Number Variant. In the interest of simplicity, here’s what you need to know about that: If you have anything other than two copies, you should speak with your physician or other medical professional who can explain what consequences might be expected, if any.

Summing up, Gina has a great set of genes (among many other fabulous traits). They are so good in fact, they can serve for both of us; I can use the help!

In the next and final post 7, I delve more deeply into my own gene interpretations vis a vis ADHD medications.