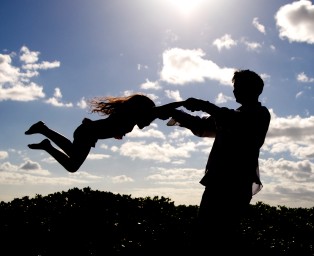 What is it like to grow up with a parent who has ADHD, especially when you don’t have ADHD yourself?  A brief essay, below, describes one woman’s experience. I welcome you to share your experience in a comment.

We hear much about parenting children who have ADHD.  We hear from parents who have ADHD. Frank South writes Stories From an ADHD Dad. But we hear very little from the child’s point of view, as a child or an adult.

This short essay’s author, Jennie Friedman, writes on her See in ADHD website:

My family has wrestled with anxiety, depression, bipolar disorder, ADHD, and schizophrenia for generations. Growing up with my entire tribe affected sparked in me the drive to educate others how to embrace our differences so we can just focus on the most important business of loving one another.

Growing Up With ADHD—When You Don’t Have It

“Why, Kebie, why can’t you just do the simplest thing? All you have to do is empty your pockets and put the receipts in THIS envelope. Why don’t you remember anything?”

Dad was getting scolded again, and I was just happy it wasn’t me. Why did she have to get so mad all of the time? I felt bad for him.

Whatever it was she was mad about, though, you’d never know by him. He was too busy to get upset; he was always on the run, dashing in and out of the house or going away on exotic business trips. Oh, sure, I heard a lot of sighs, watched his face get flush, and his forehead would get all wrinkly, but rarely did he lash back at her.

Oddly, we had the same forehead, my dad and I. We looked a lot alike even though I’m an adopted child. And while that is how I escaped the genetic pool of a family with anxiety, depression, ADHD, bipolar, and schizophrenia, I didn’t escape the familial environment that was shaped by his neurobiology.

Consequences: The Good And The Bad

There are many consequences of being raised by at least one parent with ADHD—some good and some bad, with coexisting conditions contributing to difficulties. Also, if one parent has it and the other does not, the child can witness arguing and miscommunication and misinterpret what is going on.

In my eyes, dad was the fun one who sadly wasn’t around as much as the mean bossy one. Don’t get me wrong, I loved my mom very much, but she was never the life of the party like my dad. I remember her telling people how he had Peter Pan Syndrome. I didn’t know what that meant, but it sure sounded fun.

As a young kid, it was great having an adult that all the other kids wished they had as a parent. He would take me for bike rides and let me decide which way to go even if it were so far from the house we arrived back home after dark. He would tell my friends and me the scariest ghost stories and then chase us afterward.

Mom, on the other hand, never played with us, ever. She would only tell us what to do or how to do it. She was the disciplinarian and dad, the camp counselor. Naturally, she resented this, “Why do you always have to make me the bad guy?” From my perspective, she was doing that to herself.

Throughout childhood, I felt in defense of Dad. He was my best friend and my hero. I marveled at his creative, open mind and wanted to be just like him when I grew up. He was the smartest, funniest, and most adventurous man that ever lived. But I did know something wasn’t quite right. He always seemed preoccupied, and that created an absence that was felt. He also over-committed to others, which took time away from us.

When he was around, Mom would treat him as a third child. Obviously, she wouldn’t have had to correct Dad so much if he were more like her, the perfect one. And since I was so much like him, I gathered I probably wasn’t good enough either.

Then I became a teenager, and everything fell apart.

All of the qualities that had so enamored me became embarrassing. Suddenly, his joining my friends and me while we danced to the Go-Go’s was horrifying. When we would go out to dinner, he would explain to the waitress how I was shy, which mortified me.

Worst of all, when he would talk to my friends, it was inappropriate if only because he acted as if he were one of us. Eventually, there was nothing normal about him, and I kept my distance.

I know on the surface this sounds typical. I sure thought it was. But it’s always in hindsight where we see things better.

My dad’s disorganization, faulty memory, and poor sense of time were taxing on everyone. He couldn’t engage with the mundane daily grind that Mom responsibly managed. He also had trouble with filters and boundaries, which wreaked havoc on all of his relationships as well as his career. We even moved six times in 15 years because he couldn’t keep his job.

Did this make him a bad parent? Absolutely not, but his ADHD did affect everything. Well, everything but the love. You see, I will always love him.

Growing up, did your parent(s) have ADHD? Do you think it affected their parenting style or your parents’ relationship?