You are here: Home / Medications / ADHD, Empathy & “Raising a Narcissist” 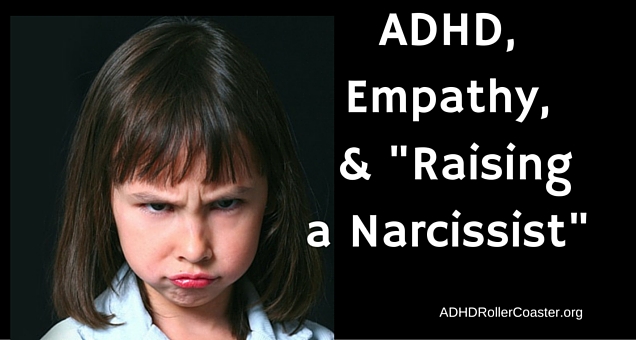 What gets lost, amid all the misguided online chatter around “drugging children” for ADHD? Compassion for these children.

In this post, Taylor J, the host of the “You, Me, and ADHD Book Club,” shares this story of her eldest child’s recent ADHD diagnosis and treatment. Taylor had despaired that her daughter would grow up to resemble her own parents: narcissistic and empathy-impaired (generally speaking, empathy deficits form the foundation for narcissism).

Taylor and her husband tried to teach empathy to the girl, but the lessons never took hold. Or, so they thought. 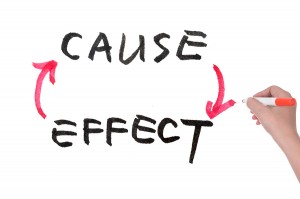 The Number One most profound thing I’ve learned about ADHD is this: it can create trouble connecting “cause” with “effect.” And that can create a world of trouble.

It doesn’t take a genius to see that continually failing to connect actions with consequences will wreak havoc on a person’s life. Worse, it can kill the potential for relationships.

I saw this play out starkly in my 10-year-old daughter. I call her “The Firecracker.”

I Vowed To Be Different From My Parents

First, let me give you some background.

My parents are horribly mentally ill, and they refuse treatment. They chose the path of blaming everyone else for their troubles, and drowning their sorrows in alcohol, drugs, and pity parties. Even when I was in the hospital—sick or with a new baby—my parents could only talk about themselves. Their utter lack of empathy was horrifying to me.

When I married and started a family of my own, I vowed to be different. Yet, in raising my first-born child, the oldest of four girls, I watched helplessly as every lesson about empathy I tried to impart seemed to bounce off her soul.

She would exploit others. She would set up games where everyone would treat her like a queen from another planet, or convince friends to “share” their favorite toys and clothes. Forever.

She would take, and never give. Her friends would give her presents, invitations, or compliments. Yet she would never see any need to return the favor.

In fact, she would complain if a compliment missed a detail, or if the gift didn’t fit just right. She would even go to a friend’s house and critique their clothes or décor for them! “You really shouldn’t have that dollhouse—it’s for babies. You should get a Barbie dollhouse.” Seriously? Where did you learn this?

I was asking the wrong question. As I came to learn much later, hers wasn’t learned behavior; it was innate.

My husband and I would explain, over and over again, that her words hurt other people. “How would you feel if Ginny came to your house and said your dollhouse was for babies?”

No “Cause and Effect”—Only “Mean Parents”

The Firecracker would look confused, and reply, “But my dollhouse is not for babies, so she would never say that!” We would punish her for saying cruel words—and she never understood why she was being punished. We were just “mean parents.”

There was more. She would explode over the tiniest frustration. Anything from itchy seams on her socks, to the bedcovers not being straight, to her oatmeal being the slightest bit “too watery” would set her off on an explosive tantrum.

I remember when she was only one year old, screaming at the shape-sorter because she couldn’t make the block go in the way she wanted it to. We did see sporadic bursts of caring from her— we could just never predict when they would happen.

Her first words upon meeting her sister: “I’m going to watch out for her, and make sure she doesn’t run out into the street without me!” At age 3, she started punching a preschool classmate who came up and shook her baby sister’s car seat carrier (while I was talking to a teacher); she was afraid he would hurt the baby’s “soft spot.”

When I was violently ill with another pregnancy, she proudly proclaimed to her sister, “Don’t worry. When Mom throws up, I’ll make you a sandwich.”

The Firecracker screamed at her sister for adjusting her stuffed-animal display. My second daughter would dissolve into tears, and ask, “Why doesn’t she love me?” The Firecracker’s response?  Her sister’s sobs were disturbing her reading time.

I started to wonder if I was raising a narcissist.

My husband and I both have ADHD. We both take medication. I know full well the dramatic changes in cognition and behavior the medication provides.

But when The Firecracker was finally diagnosed with ADHD this past July and began medication treatment, even I was not prepared for the change that followed.

I gave her the first dose of Ritalin. Two hours later, as we were returning from the grocery store, she said, “Mom, you can’t carry all that. Let me help you!” She grabbed two grocery bags and the diaper bag. “You need to ask for help when you need it, mom!” 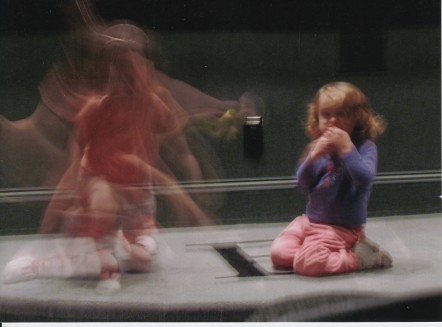 Our Firecracker, constantly in motion. With her little sister

When I had to change plans that she’d been looking forward to: “Aw, that stinks, but I know you didn’t try to make it hard for me. We can go tomorrow.”

when I wasn’t on medication?”

This much was obvious: She was as relieved as we were with the changes.

Five hours later, the medication had worn off. The Firecracker came to me, tears streaming down her face, screaming, “Mom! This is awful!!! The baby won’t stop crying! [The baby had cried for one minute.] Is this what it felt like all the time when I wasn’t on medication?”

I took her by the shoulders, looked her in the eye, lowered my voice, and said, “Don’t worry. It’s going to be okay. Yes, this is what it was like all the time. Take your next dose, then sit here and watch something on TV while I set a timer. When the timer goes off, your next dose will have kicked in.” I wiped her tears and turned on something funny.

Half an hour went by. When she felt better, she looked up at me, and said, “Mom, maybe you should get me a puzzle book to work on when I’m angry. Then I can calm down without yelling at anyone.”

I watched the rest of the night as she spoke lovingly to her sisters and forgave them when they committed the grave sin of touching her stuff.

Relief At Connections Made

As she was reading her favorite book before bed, she looked up and said, “Mom, now I understand why Eragon sighed so deeply when he saw his brother: He was afraid his brother would become a rider, too!” Even the stories were becoming more clear.

Remember, this is just the first day of ADHD treatment.

I asked my husband to tuck the girls into bed that night. Then I turned on the shower and broke down into sobs as the water washed over my face. With immense gratitude and relief, I finally realized that my daughter was not a narcissist. She actually did take in the lessons about compassion and empathy that we were teaching her, but she simply couldn’t access them when she needed to. My daughter had been suffering from a treatable brain condition, not an incurable evil that was lurking behind her smile.

Maybe my parents can be helped to change their behaviors, too—I can only hope that they’ll reach a point where they’re willing to try treatment.

So, the next time you hear someone gasp at the thought of putting a child on medication for ADHD, please remember my Firecracker. Please know that it is beyond the control of many people with ADHD, including children, to make certain cause-effect connections. Please know that, since beginning to take stimulant medication, my girl is happier and healthier than she has ever been. (More about that in a future post from Gina.) 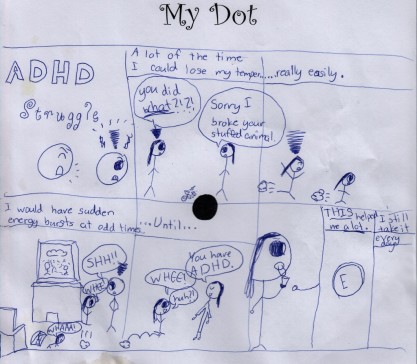 The Firecracker’s Comic: Overcoming a Struggle

I’ll close with this amazing comic that The Firecracker drew for school. I had nothing to do with this. My daughter loves graphic novels, including authors such as Raina Telegmar, and has created dozens of comics in that style.

Recently, her class read a story called The Dot, about overcoming a difficult struggle. In response, they were to write about a struggle that they overcame. This is my girl’s story.

How about you? Have you noticed a difference in your child’s

expressions of empathy or mood-regulation post-treatment for ADHD?

I welcome your perspectives.

For more on this topic, check out my previous post on