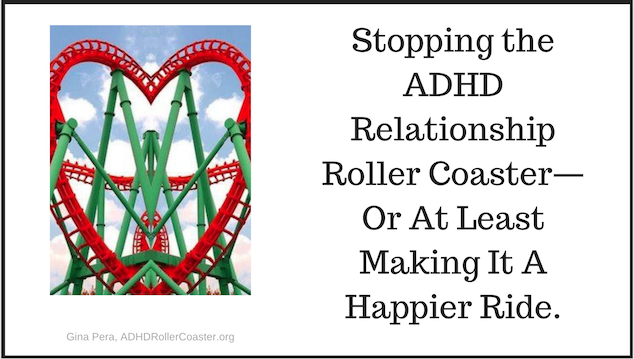 Why do I use the term ADHD Roller Coaster? Because, for more than a decade, that’s how the individuals attending my discussion groups—one for adults with ADHD, one for the partners of adults with ADHD—describe their lives.

To explain, I offer the full introduction, in two posts, from my book Is It You, Me, or Adult A.D.D.? Stopping the Roller Coaster When Someone You Love Has Attention Deficit Disorder. The first post is The View from the ADHD Roller Coaster – Both Sides – Part 1.

In the introduction, I explain how for years, I’d alternate between one group and the next—seeing very clearly the challenges for both.  This part explains what happens in the “partners of” group.

Be careful talking about good intentions to newcomers at this week’s gathering! It’s the same room but a very different crowd. The people gathered here tonight aren’t adults with ADHD; they are their partners. And most have had it with good intentions. They are also done with being a doormat and “dumpee,” warden and watchdog, crisis manager and caretaker, and a parent instead of a partner.

Ironically, the two meetings that take place one week apart—one for adults with ADHD and the other for the partners of adults with ADHD— typically show little overlap. That is, one partner or the other in a couple is either “in denial” about ADHD or feels no need to learn about it. It’s too bad because when couples act as a team in learning about ADHD, they tend to speed through the learning curve—with fewer bumps and bruises, too.

The group assembled tonight, though, has come seeking knowledge. They also seek clarity and hope that they can somehow stabilize their lives with partners who seem focused on destabilization. Until recently, most did not know that adult ADHD exists, much less that it can affect their lives so profoundly. Or they’ve suspected ADHD for a long time, but they just can’t get their partners to consider the idea or do anything about it. When they finally hear other people voicing similar threads of befuddlement, the floodgates open.

When we started dating, we had great conversations. Now I can’t speak a word before he changes the subject or zones out. I hate the way this makes me feel, like I’m boring or not worth listening to. When I try breaking off the relationship, though, he becomes attentive again, only to backslide two weeks later. He finally told me last week that he has ADHD, but he insists it is an asset. I’ve read some Web sites that advise us spouses to be more understanding, but that’s not helping.”

• Jose’s partner has a spending problem

• Sheila’s husband gets distracted while watching their child

• Brenda’s fiancé is the love of her life, but his difficulties at work are driving them apart.

“Paperwork takes him twice as long as it does his coworkers, who seem half as smart as him. He loses track of time, works until midnight, and then forgets to phone me. He was diagnosed with ADHD as a kid but says he outgrew it. I don’t think so.”

• Does Dan’s new girlfriend find him a boring kisser?

“I like her so much, but she keeps showing up late—or not at all—for dates, and later she’s super apologetic. And, while we’re enjoying a long kiss, she’ll get distracted by the least little thing. One time she blurted, ‘Forgot to feed Rex!’ That’s her dog. She says she was recently diagnosed with ADHD, but maybe she’s just using that as an excuse and she’s really not interested in me.”

• Doreen’s teen son says his Dad has ADHD, too.

“Our son won’t accept that he has ADHD, but he’s failing in school. He also asks why he should take medication if Dad won’t. My husband ‘copes’ with his own ADHD by drinking beer and riding herd on our son. Their constant fighting is driving me nuts.”

• Eric went from being a “catch” to “dropped” in three months flat. “

My new boyfriend wanted to be with me all the time and was over-the-top thoughtful. But when it stopped suddenly, he implied it was my fault, which made no sense. I’m just trying to understand what happened.”

• Jade discovered her husband’s credit-card debt after the honeymoon.

“He owes $30,000! At first, he said he’d hoped to pay it before I found out. Totally overoptimistic! Then he blamed me for overreacting. I’m feeling some kind of emotional whiplash, from our honeymoon to this. Our pastor suggested looking into ADHD, but is lying a trait? He’d told me he was entering the marriage debt-free. I love him, but I’m not sure I can forgive this betrayal.”

• Liz is tired of other people holding her responsible for her husband’s failings.

He’s my sweetheart and now we finally know why he does what he does. I’m not angry with him, but I am angry with the people, including his family, who blame me for not making him do things they expect of him. They don’t believe in ADHD and think it’s the woman’s role to be a 24/7 executive secretary for her husband.”

“When she learned she might have ADHD, my wife researched it and hyperfocused on getting better organized. She claims her BlackBerry helps her focus on the job. Great, but where’s the focus on me? If I take more than 30 seconds to say something, she eyes her ‘CrackBerry’ for the latest text message. We both work hard, but she never turns it off.” As these introductions continue, comments echo all around the room: “Your partner does that, too?” Some people laugh in amazed relief, but others fight back tears.

Grateful For Explanation — Still Dizzy on the ADHD Roller Coaster

Sure, they’re grateful for the long-overdue validation, but reality can hit hard:

• “You mean our problems aren’t all my partner’s fault—not bad temper, selfishness, or apathy?”

• “You mean the invisible enemy we’ve been battling not only has a name, it has a solution?”

Most group members here tonight still love their partners. That’s why they’ve come to this meeting. (Some, though, are straining to remember why they went on that second date. A few are asking for referrals to good divorce attorneys.)

The confusion crept up on them stealthily, they explain, and most of their partners’ behavior grew sharply more problematic with time and new responsibilities. They tackled each particular set of problems as it turned up, and so the roller coaster ride smoothed out, lulling them into the idea that their lives would stay less chaotic for a while. But then the next dip happened and the next and the next.

And so the roller coaster will continue, until they either stagger to the exit sign, succumb to permanent emotional whiplash, or develop awareness about ADHD and get on a new track.

Are you riding the ADHD Roller Coaster?  Tell us your story.
—Gina Pera