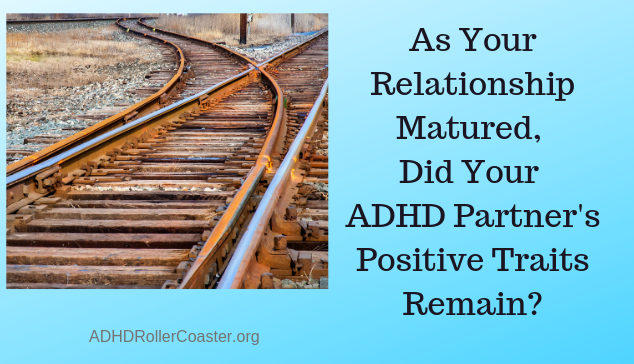 In this post, we delve into the write-in responses to this ADHD Partner Survey question: As your relationship continued, did your ADHD partner’s positive traits continue—or continue to be attractive? Predictably, the answers run the gamut.

Some ADHD Partner Survey respondents report being initially drawn to their ADHD partner’s spontaneity or go-with-the-flow attitude. With time, however, they discovered  that their partner had no choice but to be spontaneous. Planning was impossible!

Yet, in other cases, the ADHD partner’s ability to make their mate laugh has held them together during the rough times—from that first date through to their 25th anniversary, or longer.

My mantra? There is nothing “cookie cutter” about adults with ADHD, their partners (some of whom also have ADHD!), or their relationships. But there are some predictable patterns when ADHD goes unrecognized or misunderstood until well into the relationship. The better we understand these patterns, the better folks can prevent unnecessary heartache.

Previous posts from the ADHD Partner Survey include:

1.  What Traits Attracted You To Each Other? —I first compared the traits that attracted ADHD Partner Survey respondents to their mates, and vice versa.

2. Where’s That Person You Fell in Love With?—Next, I examined the degree to which those positive traits continued into the relationship (or continued to be viewed as positive traits). For review, here is the chart from that post. As you can see, about half the partners said, “Yes, those traits stayed the same.” The other half said, “Nope.”  The rest were unsure or the relationship was still young. (See chart below.)

3. In this post, we review the respondents’ write-in text responses. I’ve loosely grouped the comments into sub-headings.

(Remember: Most respondents didn’t know about Adult ADHD, and their partners were not diagnosed, until years into the relationship.) 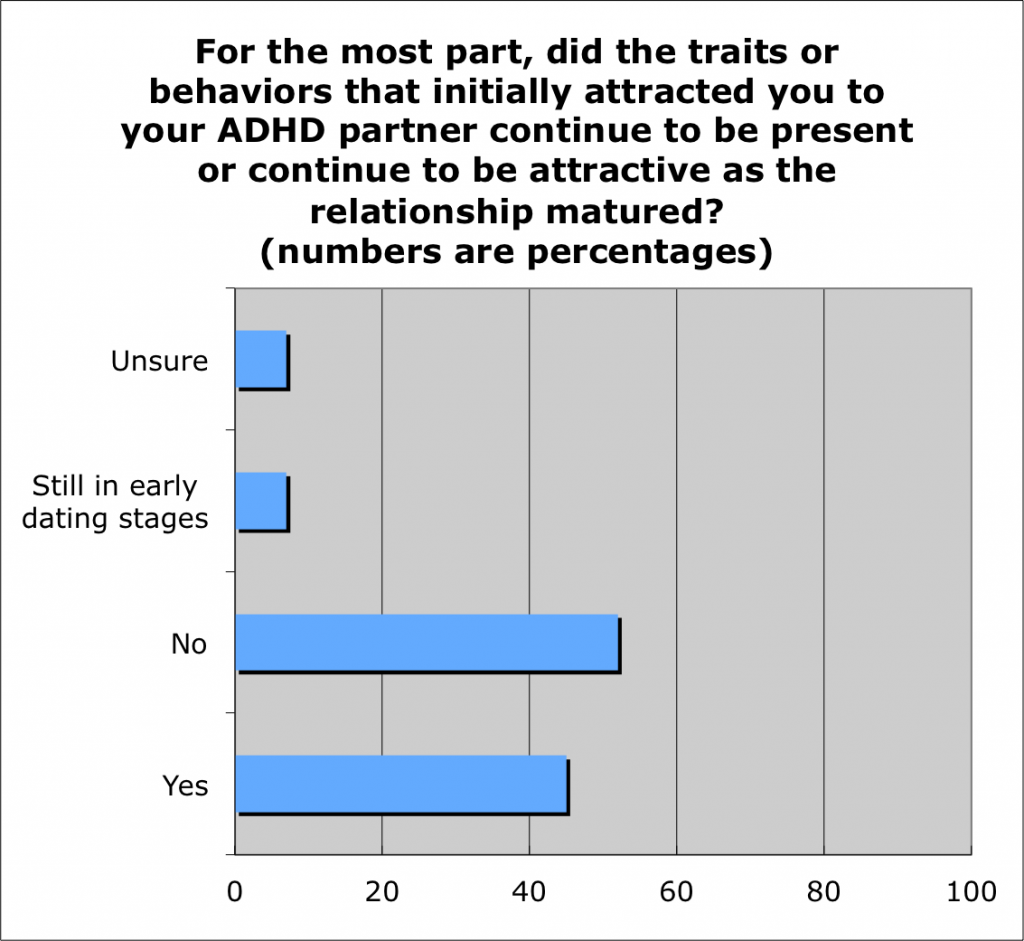 It Wasn’t Spontaneity! It Was An Inability to Plan! 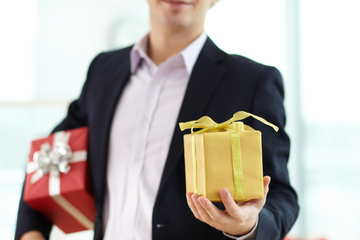 Many of the traits that attracted me to my husband became problems in our marriage.

For example, buying me expensive flowers or gifts for no special occasion while we were dating was ok, but when we had to share a household budget we fought about his loose spending habits. Always buying drinks for his friends, etc.

Also, I enjoyed his humor while we were dating, but after we were married his humor often became embarrassing; he just didn’t know when to give it a rest, and he’d make too many jokes at others’ expense. In truth, I think his “life of the party” persona was a defense: he couldn’t keep up with the various conversations, so he had to monopolize everyone’s attention. 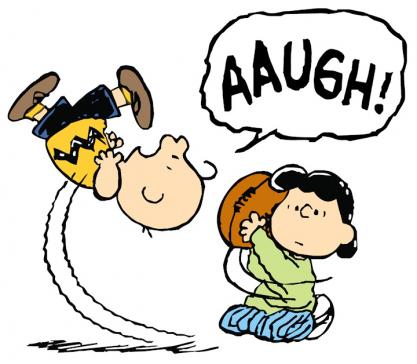 For many respondents, the feeling was that their ADHD partner seemed to be one way at first—but soon became the complete opposite. 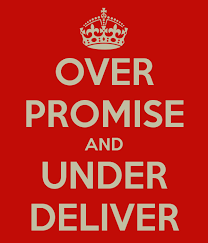 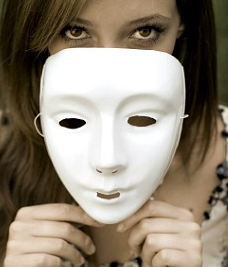 Having Children Changed Everything

I welcome your comments on this topic!

20 thoughts on “Did Your ADHD Partner’s Attractive Traits … Remain?”