You are here: Home / Relationships / When ADHD Leads to “Self-Medicating” With Arguments 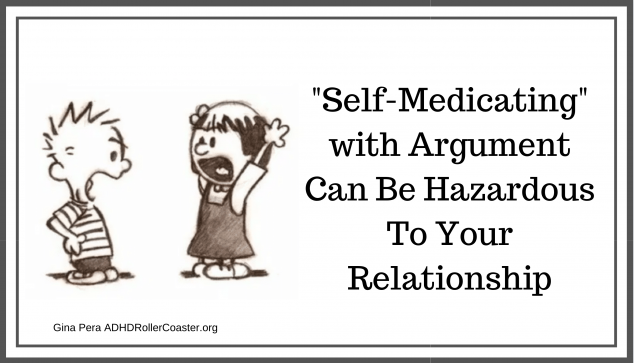 First, nothing about ADHD is universal, and this is an example. Many people with ADHD are, if anything, argument-averse. And certainly, you needn’t have ADHD to be an argumentative son of a gun.

But some individuals with ADHD do habitually bait others into heated disagreements. It’s typically a subconscious behavior. They’ve learned on some level that stimulation or adrenaline or…something…gives them a feeling of focus and calm. Because this pattern is rewarding, it gets reinforced over time.

Conflict Is Common in ADHD Relationships

There are plenty of reasons for conflict in ADHD-challenge relationships. Until both partners are on board with understanding ADHD and its treatment strategies, conflict is almost guaranteed.

A Particular Type of Couple Conflict

Again, it’s typically not intentional behavior. But that doesn’t make it any less exhausting—or destructive—for everyone involved. 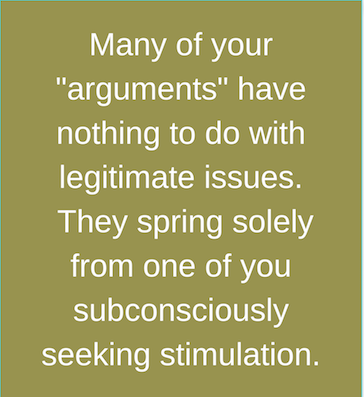 As you both become mindful of this phenomenon, you’ll soon make a discovery: Many of your “arguments” have nothing to do with legitimate issues.  They spring solely from one of you subconsciously seeking stimulation.

Self-Medicating with Other Negative (But Stimulating) Activities

For another look at this phenomenon, check Our Lost Weekend Without Meds.  Jason had not known his boyfriend before his diagnosis and medication treatment started.  When his boyfriend told him that, thanks to one snag after another, he’d have to go the weekend with medication, Jason thought, “no big deal.”  But it was a big deal, culminating in this excerpt from his story: