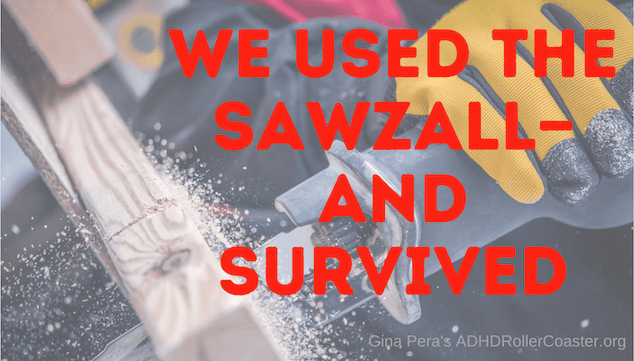 With some trepidation, Dr. Goat (my husband) and I jointly tackled a domestic task involving a sharp, whirring blade. Believe it or not: We succeeded—with all limbs and good humor intact! That’s what I call a type of ADHD Relationship Success.

What’s that you say— Why is this a big deal?  Because it would not have happened 15 years ago. Not even a consideration 20 years ago—and especially 25!

If I’d even suggested such a task, here’s Dr. Goat’s favored response for these kinds of things:   “Are you in-SANE?”

At that time, we still whirled around the ADHD relationship roller coaster. We were still grappling with misunderstood ADHD-related challenges around transitions, coordination, and communication, among others.

A not entirely unrealistic expectation of attempting such a task would have been:

Yet, it was all smooth sailing. We even had fun. 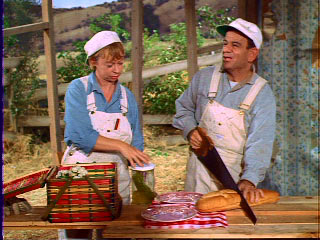 I always had faith we could get there. Dr. Goat did not.  Let’s just say that cooperation and coordination were not his strong-suits — unless at his job.

Beyond our poor joint-task-completion history, other issues factored in.

For example, he had long realized that his neurospatial sense was not to be trusted. When we started dating, he warned me not to leave valuables where he might inadvertently knock into and break them. True to his word, I lost two favorite mugs and one vase.

Ergo, why would he be fool enough to go anywhere near an electric saw? The man had a point.

Today, however, coordination and sense of “where his body is in space” is 1,000 percent better.  Excellent, in fact.  One of those little talked about benefits, for some, to consistently taking ADHD medication.  (I finally sleuthed that one out. Check this post, New Research: ADHD, Balance, and Postural Sway

Alf and Ralph Take up the Sawzall

This morning, we  set out to cut a straight line across the lower half of two old wooden cabinets. The goal: Accommodating a new, taller fridge.

A kitchen renovation awaited at some point in our future. (See wallpaper below.) We weren’t aiming for professional-quality—just a slight cut above Green Acres’ Alf and Ralph.

As the weapon of choice, we took up a new Sawzall. That’s the brand name of a particular reciprocating saw. Keeping it under control is not for the inexperienced weaklings! Especially not with odd angles and tight corners.

I’m the more experienced handy person. Yet I  sport “swimmer’s shoulders”.  Dr. Goat is taller, bigger, and stronger—with a longtime healthy respect for any machine that could cut his hands or fingers off.

I started the job. He finished it—with only minimal direction from me. He was very “engaged.” Given unforeseen metal bits, we had to reconsider our strategy several times—and calmly agree on a different approach.

Miracle of miracles, we did it!

Why Is This ADHD Relationship Success?

This might not seem impressive to folks with ADHD who are “handy”—or even those who aren’t.

Yet, Dr. Goat has always been decidedly more at ease with databases than power tools. His hyper-energetic dad was always out early on summer weekend mornings, banging around outside and making noise with some machine. His son put the pillow over his ears.

In fact, he says a big part of his motivation to get through college and grad school was, “So I wouldn’t have to do physical labor for the rest of my life.”  (Also: He loved molecular biology and computers, even before the two were merged into the field he’s worked in for decades.)

In fact, low motivation for anything but the most stimulating of activities manifested in a type of physical lethargy—from an early age.  I used to joke, “You’ve got the body of a lumberjack and the brain of a nerd.”

His parents recall other kids his age gleefully clambering up Quebec’s snow-covered hills, eager to slide down on their sleds. Dr. Goat, however, was the curmudgeonly boy trudging as if under duress, probably humming Song of the Volga Boatmen. His beleaguered figure amused the other parents to no end. But to his own parents, it was a mystery.

“It was a pointless activity!” he says now of the sledding, “All that effort going up, just to slide down!” Looking back, that perspective seems clearly due to his enormously low motivation for physical activity—or, let’s face is, any task that didn’t spark his interest.

In a bit of father-son bonding,  Dr.  Goat’s super-athletic father  took him out snow-shoeing a few years later. As you can imagine, the event does not spark fond nostalgia—for either of them. He loved being with his father, but there are limits.

Another example:  When I asked him to rub my shoulders while we were dating, he’d hang in there for about 6 seconds. Then he’d say, “I’m tired. This is hard.” The next day, he gifted me an electric, do-it-myself massager. Not what I had in mind.

I Had Faith—But It Took a Lot More Than That

Now, however, he works out regularly—and relishes it. After resisting for years!  He’s justifiably proud of his newfound strength.

The thing is, he now remembers how he feels after exercising. He notices when he skips a few days—and gets moving.  Moreover, given a sufficiently stimulating Star Trek episode, he can massage my legs quite vigorously and effectively. For the full show.

It’s not a huge stretch to say this domestic task is a metaphor for the rest of our life together:

In this post (Husband to Me: “I’m Glad You’re Not Perfect!”), I wrote about my big mistake with a pitchfork. Rather than being critical, my husband rejoiced that I screwed up.

Living for a few decades with unrecognized ADHD can make a person a bit gun-shy—always half-expecting to be called out for some unintentional, unforeseen consequence.

I always had faith that he—and we—could get there, even if that faith wore very thin at times. And so we are there.

I wish for you whatever ADHD Relationship Success you are aiming for.  To help you do just that, I’m devoting every available neuron to bring you a foundational course:  Adult ADHD: Solving the Four Essential Puzzle Pieces.  Update May 2022: The course is established, with a strong favorable response. Check it out!

How About You?  Care to share any momentous bits of ADHD relationship success? We’re all ears.